Manchester United take on Huddersfield at the John Smith’s Stadium on Sunday afternoon. Here is the line-up I think Ole Gunnar Solskjaer will go with

Manchester United will be looking to keep their top four hopes alive with victory over Huddersfield Town at the John Smith’s Stadium on Sunday afternoon. Here is the line-up I think Ole Gunnar Solskjaer will go with…

Goalkeeper: David De Gea has come under fire for some high profile errors in recent weeks but Solskjaer has confirmed the Spaniard will keep his place this weekend, not least because No.2 goalkeeper Sergio Romero has been ruled out with a knee injury.

Defence: Man Utd will assess the fitness of Chris Smalling after he missed the draw with Chelsea last week but Eric Bailly is certain to miss the trip to Huddersfield after being ruled out for several weeks with a knee injury that he sustained last weekend.

United have better news on Phil Jones as the defender has taken part in full training this week having sat out the Chelsea match with a knee injury so he could be recalled alongside Victor Lindelof on Sunday afternoon.

Ashley Young is expected to keep his place at right-back ahead of youngster Diogo Dalot while Luke Shaw should once again line-up on the left side of the back four for United.

Midfield: Ander Herrera came through the Chelsea match unscathed after making his return from a hamstring injury that kept him out for over a month so the 29-year-old should retain his place in midfield.

Paul Pogba is expected to once again start for Manchester United and although Scott McTominay is pushing for a recall, I think Nemanja Matic will retain his place alongside Pogba and Herrera in the middle of the park.

Attack: Man Utd have injury concerns in attack as Romelu Lukaku is reportedly set to miss the last two games of the season after aggravating a hamstring injury against his former club last weekend.

Marcus Rashford will be assessed after being forced off against Chelsea with a shoulder problem but the youngster is likely to keep his place up front – although he may not be fit enough to complete the full ninety minutes.

Jesse Lingard remains a doubt after missing the draw with Chelsea due to a knee complaint so Alexis Sanchez could be given a recall in attack after some impressive cameo’s off the bench recently.

Juan Mata may drop out as Anthony Martial is also pushing for a start after being named on the bench last time out. 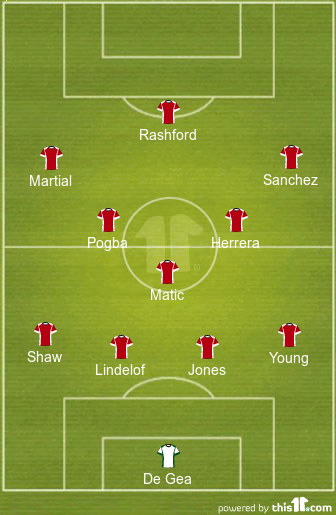