Aubameyang scored a stunning hat-trick as Arsenal beat Valencia 4-2 at the Mestalla to book their place in the Europa League with a 7-3 aggregate victory. 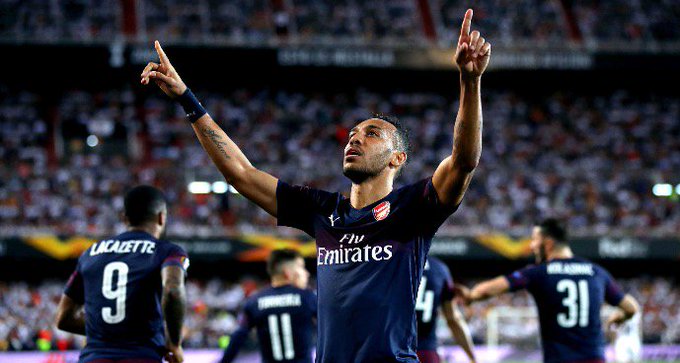 Pierre-Emerick Aubameyang scored a stunning hat-trick as Arsenal beat Valencia 4-2 at the Mestalla Stadium to book their place in the Europa League with a 7-3 aggregate victory.

Valencia started the stronger of the two teams as they looked to get themselves back in the tie having lost the first leg 3-1 at the Emirates Stadium last week and they made it 1-0 on the night when Kevin Gameiro tapped home at the far post following a swift counter attack in the 11th minute.

However, Arsenal responded well and grabbed an important away goal when Aubameyang lashed home a superb effort from 20 yards in the 17th minute to make it 1-1 on the night and 4-2 on aggregate.

We then took the lead early in the second half when Alexandre Lacazette curled home a superb finish inside the area following more good work from Aubameyang and Lucas Torreira. Arsenal now led 5-2 on aggregate meaning Valencia needed to score four goals.

The hosts pulled one back in the 58th minute when Gameiro got his second of the game to make it 2-2 following some sloppy Arsenal defending but we restored our lead when Ainsley Maitland-Niles set-up Aubameyang to make it 3-2.

The Gabon international then sealed his hat-trick with a powerful strike into the roof of the net late on to seal a 4-2 victory on the night and book Arsenal’s place in the Europa League final with a 7-3 aggregate win.