Arsenal take on Burnley at Turf Moor on Sunday afternoon. Here is the side Gooner Mac thinks Unai Emery will select for the game:

Arsenal will be looking to end the Premier League season on a high when they take on Burnley at Turf Moor on Sunday afternoon. Here is the side Gooner Mac thinks Unai Emery will select for the game:

Goalkeeper: Bernd Leno is expected to be recalled between the sticks after Petr Cech kept goal for the Europa League win in Valencia on Thursday night.

Defence: Arsenal are likely to deploy a back three/five against Burnley this weekend but Laurent Koscielny could be rested in order to protect his troublesome Achilles ahead of the Europa League final. The last thing we need is Koscielny aggravating the issue and ruling himself out of the final against Chelsea.

That means Shkodran Mustafi could be given a recall on Sunday after he was benched in Spain last night. Sokratis is expected to keep his place while Nacho Monreal should also once again start on the left side of the back three.

Midfield: Ainsley Maitland-Niles is available again after serving a one-game domestic ban during the 1-1 draw against Brighton last weekend. He had an indifferent game against Valencia in Europe on Thursday night but I still expect him to retain his place in the right wing-back position while Sead Kolasinac should also start on the opposite flank.

Lucas Torreira gave his all against Valencia and he’s looked tired recently so I wouldn’t be surprised to see him given a breather against Burnley. With Aaron Ramsey still out with a hamstring injury, Matteo Guendouzi is the man expected to come in alongside Granit Xhaka in the middle of the park.

Attack: Pierre-Emerick Aubameyang was unplayable against Valencia with his hat-trick firing us to the final. Ideally we’d wrap the Gabon hitman in cotton wool ahead of the final but Arsenal still have a very slight chance of finishing above Tottenham, we need to secure fifth ahead of Man Utd and Aubameyang is still gunning for the Golden Boot so I think he’ll start on Sunday.

However, Emery may decide to give Alexandre Lacazette a breather as he might be reluctant to deploy two strikers up front at Turf Moor. That means Alex Iwobi could be set for a recall after being named on the bench last time out.

Mesut Ozil had a fairly average game against Valencia but I’d be shocked if he started on Sunday as Burnley away isn’t his type of game. Therefore, I think we’ll see Henrikh Mkhitaryan recalled with Ozil dropping to the bench. 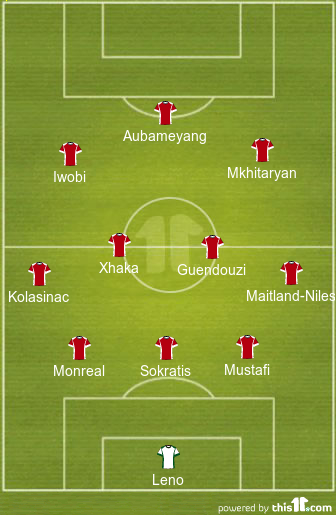