Chelsea take on Leicester at the King Power Stadium on the final day of the season. Here is the side I think Maurizio Sarri will select for the game:

Chelsea will be looking to secure third place in the table with a win over Leicester City at the King Power Stadium on the final day of the season. Here is the side I think Maurizio Sarri will select for the game:

Goalkeeper: Kepa Arrizabalaga was the hero on Thursday night as he saved two penalties to secure Chelsea’s place in the Europa League final and he’s expected to keep his place in goal on Sunday.

Defence: Chelsea will be without Andreas Christensen after he was forced off with a knock against Eintracht Frankfurt while Antonio Rudiger is once again missing with a knee ligament injury and Gary Cahill remains out of favour.

Therefore, we could see Cesar Azpilicueta move into the middle of the back four to start alongside David Luiz with Davide Zappacosta coming in at right-back. Sarri may also freshen things up at left-back with Marcos Alonso coming in for Emerson Palmeiri.

Midfield: Chelsea will continue to be without N’Golo Kante as he’s on the sidelines with a hamstring injury that he picked up last weekend while Ruben Loftus-Cheek was substituted with severe cramp on Thursday night.

The youngster has been in fine form recently and got himself on the score-sheet against Frankfurt but I don’t think Sarri will risk him from the start tomorrow so Ross Barkley is expected to be recalled.

Jorginho will continue in the deep lying playmaker role for the Blues while Mateo Kovacic should keep his place in midfield but Ethan Ampadu remains out with a back problem.

Attack: Chelsea are likely to make changes in attack with Gonzalo Higuain pushing for a recall and the Argentinean international could replace Olivier Giroud up front after his poor performance on Thursday night.

Pedro is expected to come in for Willian on the right side of the Chelsea attack after the Spaniard was named among the substitutes in the Europa League semi-final second leg.

The Blues will want to wrap Eden Hazard in cotton wool ahead of the Europa League final later this month but Sarri will still be keen to end the campaign with a win to wrap-up third so I expect the Belgian to start. Callum Hudson-Odoi remains on the sidelines with a serious Achilles injury. 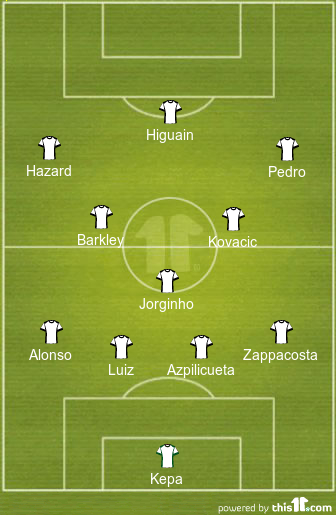