Managers are working hard trying to strengthen their squads during the summer transfer window so we’ll bring you all the latest news and gossip from around the globe. Today, Man Utd are linked with Bruno Fernandes…

Manchester United are closing-in on a £71m deal to sign Bruno Fernandes ahead of Manchester City after Ole Gunnar Solskjaer identified the Sporting Lisbon star as a prime target this summer, according to reports in Portugal via the Sun.

Fernandes joined Sporting from Sampdoria in 2017 and has been a key player for the Portuguese outfit this season having contributed a stunning 32 goals and 18 assists in 53 games making him one of the most productive attackers in European football.

His sensational form has caught the eye of clubs here in the Premier League with both Manchester clubs strongly linked in recent weeks but it looks as though Pep Guardiola could miss out on the 24-year-old to his rivals.

The Sun are citing a report from A Bola that claims Manchester United are ahead of City in the race to sign Fernandes with the Red Devils believed to be closing-in on a potential deal worth around £71m. 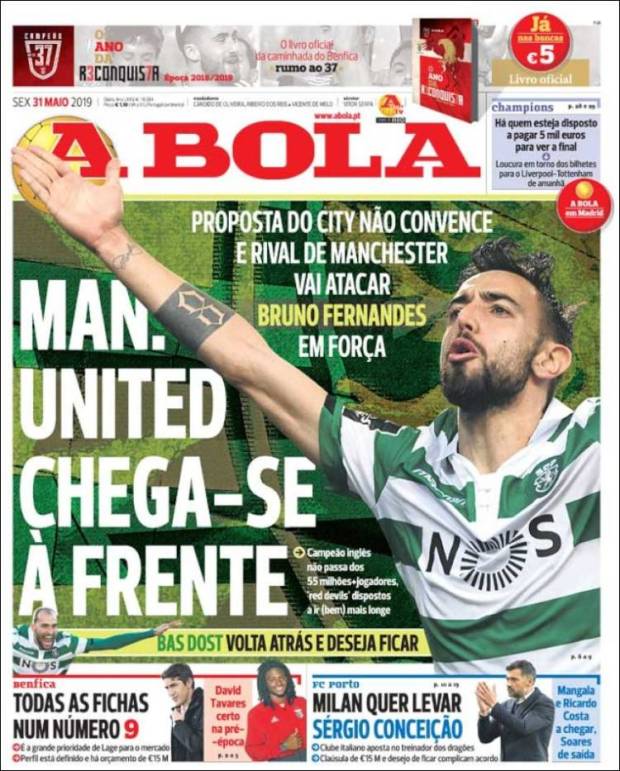 The Portuguese outlet says Ole Gunnar Solskjaer has made Fernandes one of his prime transfer targets and United are now pushing to get a deal wrapped up after out maneuvering City in the chase to land the exciting attacker.

Solskjaer is expected to be extremely active in the market this summer as he looks to revamp a squad that finished sixth in the league this season so major work is needed if United are to be considered serious challengers again any time soon.

Paul Pogba, Alexis Sanchez and Anthony Martial are among the players being linked with moves away from Old Trafford this summer so Man Utd need to bring in attacking reinforcements and it seems Fernandes is firmly on their radar.

The Portuguese international is a central attacking midfielder who operates behind the forwards so his output is superb considering he was involved in almost a goal a game this season despite not being a striker.

Fernandes has already hinted his future may lie away from Sporting and I think he’d be an exciting addition to the Man Utd squad if they could get this proposed deal over the line. Although £71m would be a huge investment for a player that’s yet to prove himself outside of Portugal.

Would he be able to make the step up and do the business in the Premier League? We’ll have to wait and see next season if he does end up joining United this summer.