Arsenal chiefs fly out to seal deal for £36m star, player due to undergo medical

Managers are working hard trying to strengthen their squads during the summer transfer window so we’ll bring you all the latest news and gossip from around the globe. Here, Arsenal are heavily linked with Everton Soares… 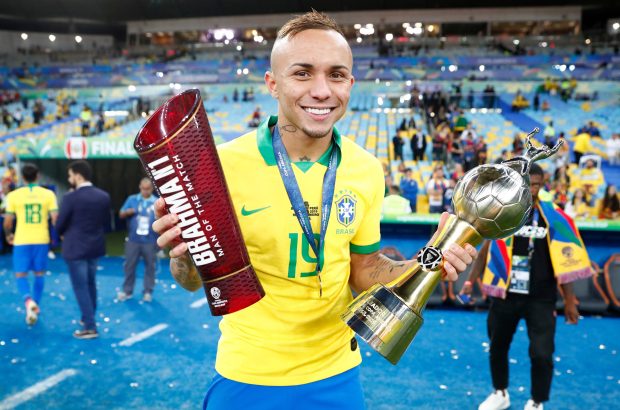 Arsenal doctors are set to fly over to Brazil to oversee a medical as Unai Emery closes-in on a deal to sign Gremio attacker Everton Soares this summer, according to reports via The Sun.

Emery is desperately trying to strengthen his attacking options ahead of the start of the new Premier League season and a winger is on the agenda as we have a real lack of genuine options on the wing in the squad right now.

We’ve been linked with the likes of Wilfried Zaha and Ryan Fraser in recent months but it looks like Arsenal have now turned their attention to an alternative target after failing to agree deals with Crystal Palace or Bournemouth.

The Sun says Arsenal have held positive talks with Everton Soares over a potential move to the Emirates and they cite Brazilian reporter Sergio Araujo as saying that club officials will travel to Brazil tomorrow to try and wrap-up a deal for the winger.

Araujo also says Arsenal doctors will oversee a medical and these claims are supported by Brazilian radio station Radio Grenal as they are also reporting that Everton is due to undergo medical tests with Arsenal this week.

It’s not clear whether we’ve already made a formal offer but UOL claim Gremio want at least £36m for the 23-year-old signature and the Sun says new technical director, Edu, has held talks with Everton’s agent Gilmar Veloz.

The news comes after the player cast doubt that he’ll be a Gremio player by the end of the week after receiving an offer from an unnamed club. Everton is quoted by the Sun as saying:

“At this moment I have an offer, but I can’t say the name of the club. Just like I can’t promise that on Thursday I’ll still be playing for Gremio, we’ll see.”

All signs appear to suggest Arsenal are the club in question but the newspaper report says AC Milan and Atletico Madrid have also been linked with the Brazilian international so it remains to be seen whether either of those clubs are trying to gazump our deal.

Everton has emerged as one of the most exciting talents in South American football in recent years and he already has 6 goals and 1 assist in his 13 appearances so far this season while he recently played an important role in Brazil winning the Copa America.

The youngster is predominantly a left winger but he can play anywhere across the attacking midfield positions so he’d give Emery a very useful option if Arsenal were successful in luring him to the Emirates this summer.