Tottenham kick off their new campaign when they entertain Aston Villa on Saturday. Here is the side we think Mauricio Pochettino will select

Tottenham Hotspur kick off their 2019/20 Premier League campaign when they entertain Aston Villa at the new White Hart Lane on Saturday evening.

Goalkeeper: He may not have enjoyed the best of form during the closing stages of last season but Hugo Lloris is still the undisputed number one and will keep his place between the sticks ahead of Pablo Gazzaniga.

Defence: Tottenham sold Kieran Tripper to Atletico Madrid this summer and haven’t replaced him so it looks like Kyle Walker-Peters will see plenty of game-time this season. Serge Aurier has been carrying a wrist injury while Juan Foyth is injured/suspended so Walker-Peters should start at right-back tomorrow.

Ben Davies is a doubt due to a hip injury while summer signing Ryan Sessegnon has been ruled out for four weeks with a hamstring problem so Danny Rose could start at left-back despite being linked with a move this summer.

Toby Alderweireld is still at Tottenham despite being strongly linked with a move throughout the summer but he looks set to see-out the last year of his contract and should start alongside Jan Vertonghen against Villa with Davinson Sanchez on the bench.

Midfield: Tottenham splashed out a club record £62m on the signing of Tanguy Ndombele this summer and the French international is set to make his competitive debut in the middle of the park this weekend.

Harry Winks is likely to take the holding role with Eric Dier out through injury meaning Moussa Sissoko may have to settle for a place on the bench. Victor Wanyama will hope to make the squad amid rumours he could be on the move to Europe.

Attack: Christian Eriksen is still a Tottenham player amid links with a move to Madrid but I expect the Danish international to still start tomorrow evening in the advanced midfield role meaning Giovani Lo Celso may have to settle for a place among the subs.

Dele Alli is ruled out with a thigh injury while Heung-min Son serves the second of his three-game ban following a sending off towards the end of last season so Erik Lamela is expected to get the nod in attack.

Harry Kane will lead the line up front once again and youngster Troy Parrott could be in the squad as back-up after Pochettino failed to sign a replacement for Fernando Llorente following his exit this summer.

Lucas Moura will be hoping to celebrate signing a new contract with a solid performance against Aston Villa and I think we’ll see him joining Kane and Lamela in the Tottenham attack tomorrow. 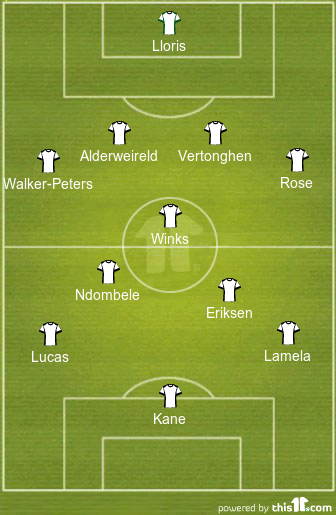