Chelsea face a tough Premier League opener against Manchester United at Old Trafford on Sunday. Here is the side I think Frank Lampard will select

Chelsea face a tough Premier League opener against Manchester United at Old Trafford on Sunday afternoon. Here is the side I think Frank Lampard will select for the game:

Goalkeeper: Kepa Arrizabalaga impressed during his debut campaign in England last season and the Spaniard is expected to continue as Chelsea’s number one under Lampard.

Defence: There will be no David Luiz after he completed a shock move to Arsenal on deadline day while Antonio Rudiger is still not 100% fit following his serious knee injury. Therefore, Kurt Zouma is expected to start alongside Andreas Christensen in the middle of the Chelsea defence.

Cesar Azpilicueta is set to continue at right-back against Man Utd with Davide Zappacosta still being linked with a move back to Italy this summer while it looks like Emerson is ahead of Marcos Alonso in the left-back pecking order.

Midfield: N’Golo Kante is back in full training following a knock but the Frenchman faces a late fitness test. No doubt Lampard will give Kante every opportunity to prove his fitness ahead of the trip to United. Matteo Kovacic is on stand-by to step-in if Kante is ruled out.

Chelsea have been favouring a 4-2-3-1 formation in pre-season so it looks like Jorginho will be playing in a slightly different role under Lampard. The Italian international is expected to line-up alongside Kante in a midfield two this season.

Ruben Loftus-Cheek is out with a long-term Achilles injury but Ross Barkley is pushing for a start having impressed in pre-season. However, Mason Mount has also staked his claim for a starting spot with some eye-catching performances and the youngster is a favourite of Lampard’s having worked with him at Derby so he might get the nod in the advanced midfield role.

Attack: Chelsea will obviously start life without Eden Hazard after he joined Real Madrid this summer but Christian Pulisic is set to make his Premier League debut after finally linking up with his new team-mates.

The American international joined Chelsea back in January and remained on loan at Borussia Dortmund during the second half of last season but the winger will now try to fill Hazard’s boots on the left wing.

Willian isn’t 100% match fit yet having resumed pre-season training late following his exploits at the Copa America so Pedro is likely to start on the right side of the Chelsea attack against United tomorrow. Callum Hudson-Odoi remains out through injury but Chelsea have options up front. Olivier Giroud and Michy Batshuayi are hoping to feature but Tammy Abraham appears to be Lampard’s favoured choice through the middle. 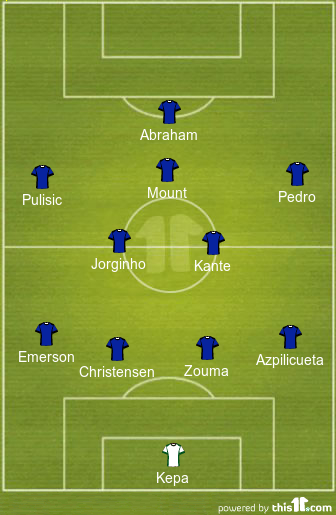