Manchester United take on Crystal Palace at Old Trafford on Saturday afternoon. Here is the team we think Ole Gunnar Solskjaer will select:

Manchester United will be looking to get back to winning ways when they take on Crystal Palace at Old Trafford on Saturday afternoon. Here is the team we think Ole Gunnar Solskjaer will select:

Goalkeeper: I don’t think we should waste too much time debating over who’ll start in goal for United as David De Gea is certain to retain the gloves this weekend.

Defence: Solskjaer seems to have a settled back four after splashing out around £130m on two new defenders in the summer. Aaron Wan-Bissaka is set to take on his former side just weeks after leaving Palace for United while Luke Shaw has established himself as the first choice left-back.

Harry Maguire has already made a huge impact at Man Utd since joining in a record deal from Leicester and the England international is expected to continue alongside Victor Lindelof in the heart of defence on Saturday.

Axel Tuanzebe seems to have been promoted to third-choice centre-back so Chris Smalling and Phil Jones may miss out on a place in the squad yet again while Eric Bailly remains out with a knee injury.

Midfield: The United players have leaped to the defence of Paul Pogba after he suffered vile racist abuse following his penalty miss during the 1-1 draw at Wolves on Monday night. The Frenchman actually had a good game despite seeing his spot-kick saved and he’s expected to keep his place in midfield against Palace.

Scott McTominay appears to have played his way into Solskjaer’s starting eleven and is now ahead of Nemanja Matic in the pecking order so I expect him to line-up alongside Pogba with Matic on the bench.

Andreas Pereira is pushing for a recall after being dropped against Wolves despite a positive performance against Chelsea on the opening weekend of the new season. However, I think we may see Juan Mata given a start in the advanced midfield position.

Attack: Jesse Lingard could be the man to make way after failing to impress in the No.10 role last time out and Solskjaer may want to keep the pace of Daniel James in the team against a stubborn Palace defence.

Anthony Martial got his second goal in two games with a strike at Wolves so he should keep his place up front with Marcus Rashford starting from the wing – although the duo will no doubt interchange throughout the game.

Alexis Sanchez is still being linked with a move to Italy so I don’t think he’ll be involved in the squad. Therefore Mason Greenwood could find himself named among the substitutes once again this weekend. 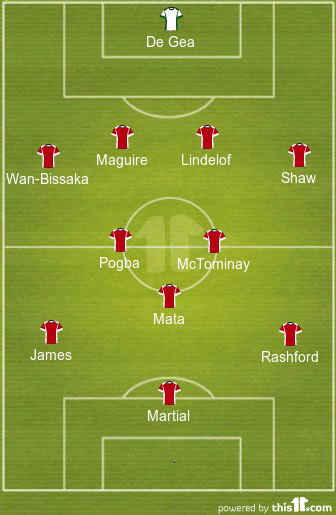