The draw for the 2019/20 Champions League has taken place this evening with Liverpool, Chelsea, Tottenham and Manchester City all finding out their fate.

The draw for the 2019/20 Champions League has taken place this evening with Liverpool, Chelsea, Tottenham and Manchester City all finding out their fate.

Liverpool were in Pot 1 as the current holders after their sensational victory over Tottenham in last years final and the Merseysiders will be looking to defend the trophy this season. Jurgen Klopp’s side have been drawn in Group E and will once again take on Napoli having been pitted against them in the group stages last year. Liverpool will also take on Red Bull Salzburg and Genk.

Manchester City will be desperate to make their mark in the Champions League having failed to mount a serious challenge in Europe under Pep Guardiola despite their domestic dominance. The Citizens are in Group C along with Shakhtar Donetsk, Dinamo Zagreb and Atalanta.

Chelsea booked their place in Europe’s elite competition after finishing third in the Premier League last season while they also won the Europa League with victory over Arsenal in Baku. The Blues have been drawn in Group H and they’ll take on last years semi-finalists Ajax, Valencia and Lille.

Tottenham will be looking to get over last year’s heartbreak in Madrid and mount another charge at the Champions League having qualified with a fourth-placed finish in the Premier League. Spurs have been drawn in Group B along with Bundesliga giants Bayern Munich, Olympiacos and Red Star Belgrade.

Liverpool will be confident of progressing from their group while Man City couldn’t have hoped for a better draw but Chelsea have some tricky games ahead of them as all three of their opponents are solid teams. Spurs obviously face a huge test against Bayern but they should be strong enough to progress against Olympiacos and Red Star.

Here is the confirmed groups: 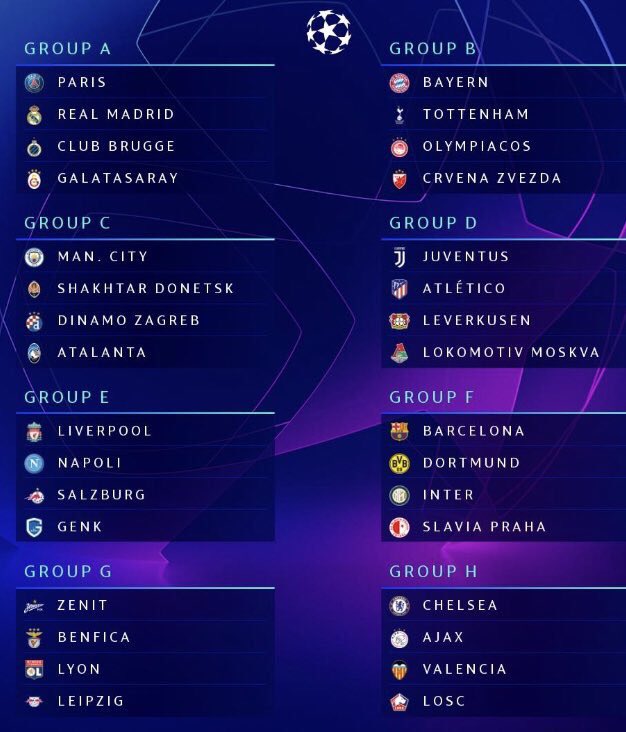