Tottenham entertain Crystal Palace in north London on Saturday afternoon. Here is the side we think Mauricio Pochettino will select for the game:

Tottenham get back to Premier League action when they entertain Crystal Palace in north London on Saturday afternoon. Here is the side we think Mauricio Pochettino will select for the game:

Goalkeeper: There can’t be too much debate over who’ll start in goal for Tottenham this weekend as Hugo Lloris is certain to retain the gloves with Pablo Gazzaniga once again on the bench.

Defence: Jan Vertonghen was recalled for the draw at Arsenal before the international break and he’ll be hoping to keep his place alongside Toby Alderweireld as Davinson Sanchez is a major doubt to face Palace.

The Colombian was forced to play at right-back in the North London Derby but he picked up an ankle injury while away with his country and will need to be assessed today before his availability is determined.

The good news for Tottenham is that Kyle Walker-Peters is back in full training after recovering from a hamstring injury so he could be recalled at right-back while Danny Rose should keep his place on the opposite side of the back four.

Juan Foyth remains out with an on-going ankle problem but Ryan Sessegnon could make his first appearance in a Tottenham shirt after recovering from a hamstring injury – although a place on the bench is probably the best he can hope for.

Midfield: Tottenham’s record signing Tanguy Ndombele could be back in the squad after returning to full training following a hamstring injury that kept him out of the games against Arsenal and Newcastle. I don’t think Pochettino will push him too hard so the Frenchman may be named on the bench.

Eric Dier is also back in contention after recovering from a hip problem but I don’t see him being recalled to the starting eleven as Harry Winks and Moussa Sissoko are expected to keep their places in midfield.

Attack: Christian Eriksen scored against Arsenal after being recalled by Pochettino and I think he’ll keep his place in the advanced attacking midfield role against Crystal Palace this weekend.

Hueng-min Son should also start is support of Harry Kane up front. The Spurs talisman should be in buoyant mood following his goal-scoring exploits for England during the international break.

Lucas Moura and Erik Lamela are other options for Tottenham in attack but Dele Alli is pushing for a recall to the starting eleven and he may get the nod. However, Giovani Lo Celso is missing after being ruled out for several weeks with a hip injury that he picked up while away with the Argentina squad. 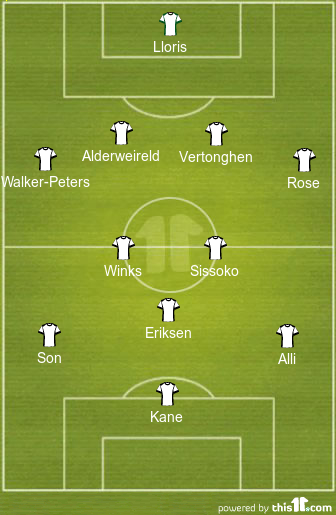