Chelsea take on Crystal Palace at Stamford Bridge on Saturday lunchtime. Here is the team we expect Frank Lampard to select for the game:

Chelsea will look to cement their place in the top four with a win over Crystal Palace at Stamford Bridge on Saturday lunchtime. Here is the team we expect Frank Lampard to select for the game:

Goalkeeper: Kepa Arrizabalaga conceded four goals during the thrilling 4-4 draw with Ajax on Tuesday night but the Spaniard is certain to keep his place between the sticks with Willy Caballero once again on the bench.

Defence: Lampard seems to have settled on a back four that’s served him well lately and I don’t see him making too many changes to his defence despite Chelsea conceding four times in midweek.

Andreas Christensen is available after recovering from injury but I think Fikayo Tomori will keep his place alongside Kurt Zouma in the middle of defence. Antonio Rudiger is still working his way back from a groin problem.

Reece James is pushing for a recall after scoring off the bench against Ajax but I think Cesar Azpilicueta will keep his place at right-back after also getting on the scoresheet on Tuesday night. However, Emerson Palmeiri could replace Marcos Alonso at left-back.

Midfield: N’Golo Kante was back on the bench in midweek after recovering from a groin injury and the Frenchman is expected to come into the starting eleven on Saturday as Jorginho is suspended after collecting five bookings this season.

Mateo Kovacic is certain to keep his place in the Chelsea midfield but Mason Mount is a major doubt for the visit of Crystal Palace after limping off with an ankle problem against Ajax.

With Ross Barkley still working his way back to full fitness from an ankle injury and Ruben Loftus-Cheek still sidelined with an Achilles problem Lampard doesn’t have too many options in the middle of the park.

Attack: Therefore, we could see Chelsea play a slightly different formation in attack with Christian Pulisic deployed in a more central role which would pave the way for Callum Hudson-Odoi to get a recall on the wing.

Willian is expected to keep his place ahead of Pedro on the other side of the Chelsea attack while Tammy Abraham should continue to lead the line up front with Michy Batshuayi and Olivier Giroud vying for places on the bench. 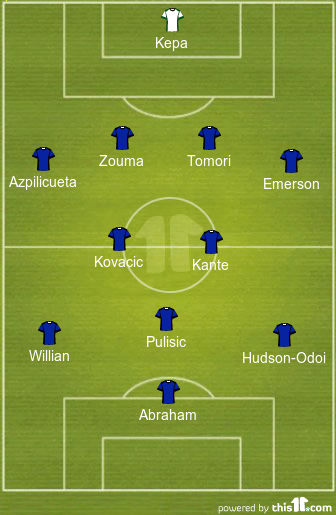