Arsenal need to get back to winning ways against West Ham on Monday night. Here is the side Gooner Mac thinks Ljungberg will select for the game:

Arsenal are under huge pressure to end their slump and get back to winning ways with victory at West Ham on Monday night. Here is the side Gooner Mac thinks Ljungberg will select for the game:

Goalkeeper: Bernd Leno has performed well in recent games and he’s kept Arsenal in matches with a string of fine saves so he’s certain to keep his place in goal tomorrow with Emi Martinez on the bench.

Defence: The Arsenal defence continues to gift opposition teams cheap goals so Ljungberg needs to find a way to tighten things up at the back. Rob Holding could be the answer but he’s a doubt with a knee injury that’s kept him out of the last three games so we might see Sokratis continue alongside David Luiz once again on Monday night.

Hector Bellerin should keep his place ahead of Calum Chambers at right back but we might see a change on the opposite flank with Kieran Tierney pushing to replace Sead Kolasinac at left-back.

Midfield: Arsenal’s midfield was badly exposed once again during the defeat to Brighton so Ljungberg needs to find the right balance. Granit Xhaka appears to be back in favour under the Swedish coach so he could keep his place at West Ham.

Matteo Guendouzi is pushing for a recall after being named on the bench last time out and Lucas Torreira is the man most likely to make way. We could see Ljungberg revert to a 4-2-3-1 as the 4-3-3 formation hasn’t worked in his first two matches in charge.

That tactical switch could see Joe Willock drop out after disappointing against Brighton and Norwich with Mesut Ozil moved into the central attacking midfield position after playing out wide recently. Dani Ceballos remains out with a hamstring injury.

Attack: Pierre-Emerick Aubameyang is wasted on the wing but Ljungberg clearly wants to try and get the Gabon international and Alexandre Lacazette into the starting eleven. Personally I’d like to see the boss make a decision and leave one of them out for the good of the team but it looks like he’ll persist with Auba wide and Laca through the middle.

Nicolas Pepe should be given a start after making a positive impact off the bench last Thursday night. The Ivorian has been left out of the Arsenal eleven recently but I think we’ll see him back in the team on the right win at West Ham tomorrow.

Gabriel Martinelli, Bukayo Saka and Reiss Nelson are all options on the bench if Ljungberg wants to freshen things up in attack. 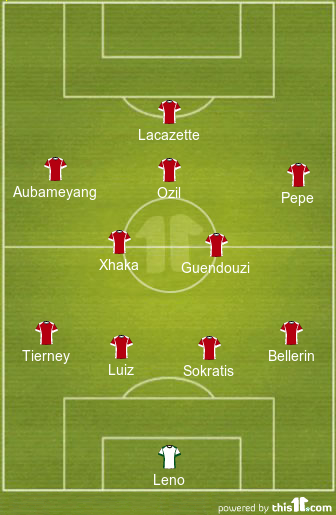