This is our match preview ahead of Arsenal’s Europa League clash with Standard Liege including team news, line-ups and prediction

Arsenal will look to secure top spot in their Europa League group with a win over Standard Liege this evening [5.55pm kick-off].

The Gunners finally got back to winning ways with a 3-1 comeback victory over West Ham on Monday night ending a disastrous run of nine games without a win in all competitions – our worst run since the 70’s.

Victory at the London Stadium has boosted Arsenal’s hopes of getting back in the mix for a top four finish in the Premier League this season but the Europa League remains a realistic way for us to get back into the Champions League next year.

Arsenal currently sit top of Group F on 10 points but defeat to Eintracht Frankfurt last time out means top spot is still up for grabs as the Germans are just one point behind in second place and host Vitoria in their last game today.

We simply need to match Frankfurt’s result to secure qualification to the knockout stages as group winners – as long as we don’t lose 5-0 this evening – while a win in Belgium would obviously guarantee we progress as group winners.

Arsenal will be without Kieran Tierney for up to three months after he suffered a dislocated shoulder during the win at West Ham so Sead Kolasinac shouldn’t be risked ahead of Sunday’s clash with Man City. Youngster Zach Medley could be given a chance at left-back.

Hector Bellerin has missed the trip to Liege with a minor hamstring injury while Rob Holding is still out with a knee problem. Granit Xhaka has been ruled out for at least two games with concussion.

Nicolas Pepe won’t be involved today after suffering a minor knee injury at West Ham while Dani Ceballos remains on the sidelines with his own knee issue that’s hampered him for over a month.

Pierre-Emerick Aubameyang and Mesut Ozil are expected to be rested while the likes of Bukayo Saka, Reiss Nelson, Joe Willock and Emile Smith Rowe could feature. Alexandre Lacazette is expected to lead the line up front after not being involved at West Ham. 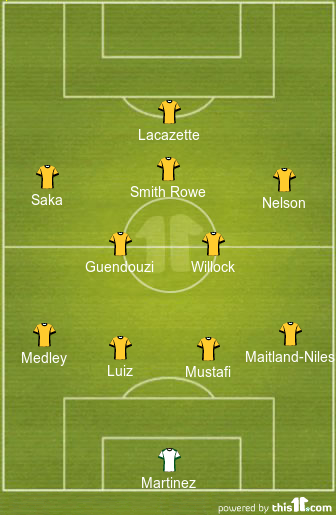 Standard Liege 1-2 Arsenal: Arsenal won the reverse fixture 5-0 at the Emirates but our form has dropped off a cliff since that game and Ljungberg will field a weakened side this evening so I’m expecting a much tougher match. Hopefully the players are focused and don’t have one eye on the Man City game as we still need a win to guarantee top spot and earn an easier drawn in the next phase. I don’t think it will be straightforward but I’m backing Arsenal to edge it 2-1.