Chelsea take on Bournemouth at Stamford Bridge on Saturday afternoon. Here is the team we expect Frank Lampard to select for the game:

Chelsea take on Bournemouth at Stamford Bridge on Saturday afternoon. Here is the team we expect Frank Lampard to select for the game:

Goalkeeper: There is no doubt who’ll start in goal as Kepa Arrizabalaga is certain to keep his place with Willy Caballero once again on the bench.

Defence: Chelsea are expected to be handed a boost with Fikayo Tomori coming back into contention. The young centre-back missed the win over Lille on Tuesday night as he wasn’t risked due to a minor hip injury but Tomori is set for a recall this weekend.

Antonio Rudiger made his long-awaited comeback from a knee injury on Tuesday night but Lampard is unlikely to risk him again so soon after a couple of months on the sidelines so the German is likely to be given a breather on Saturday. Andreas Christensen is an option for Chelsea but Kurt Zouma has cemented himself as a regular as is expected to keep his place against Bournemouth.

Reece James is pushing for a recall at right-back after being named on the bench in midweek so Cesar Azpilicueta could move to the left with Emerson Palmeiri making way.

Midfield: Jorginho was recalled in the Champions League after being named as a sub for Chelsea’s previous two matches and he’s likely to keep his place alongside N’Golo Kante in the middle of the park.

Mateo Kovacic has played a lot of football lately so the Croatian international might be given a rest on Saturday with Mason Mount recalled to start in the advanced attacking midfield position.

Ross Barkley is back in contention after returning from an ankle injury recently but a place on the bench is the best he can hope for while Ruben Loftus-Cheek remains on the sidelines with an Achilles injury.

Attack: Tammy Abraham was once again on the scoresheet on Tuesday night and he’s certain to lead the line up front with Michy Batshuayi named among the substitutes. Olivier Giroud remains a doubt with an ankle injury that kept him out of Chelsea’s win over Lille.

Lampard may decide to freshen things up in attack with Callum Hudson-Odoi pushing for a recall. The youngster may replace Willian in the Chelsea front three with Christian Pulisic keeping his place on the flank. 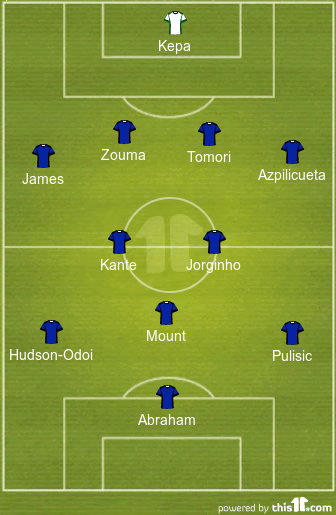