Arsenal take on Everton at Goodison Park on Saturday afternoon. Here is the side Gooner Mac thinks Freddie Ljungberg will select for the game:

Arsenal desperately need to get their season back on track with a win when they take on Everton at Goodison Park on Saturday afternoon.

In-coming boss Mikel Arteta is reportedly going to be in the stands to watch Arsenal this weekend but he won’t be in the dugout just yet so Freddie Ljungberg will remain in charge. Here is the side Gooner Mac thinks he’ll select for the game:

Goalkeeper: Bernd Leno has probably been Arsenal’s best player this season and has kept us in a number of games so he’s certain to keep his place with Emi Martinez on the bench.

Defence: Arsenal have problems in defence as Kieran Tierney has been ruled out for three months with a dislocated shoulder while Sead Kolasinac is expected to miss the trip to Everton after suffering a twisted ankle during the defeat to Man City last weekend. Ljungberg could call-up a youngster to start at left-back but he went with a back three in the Europa League game at Standard Liege last week and I think he might do the same on Saturday with Bukayo Saka playing in the wing-back role.

Rob Holding is still a doubt with a knee injury so the defence is likely to be Sokratis, David Luiz and Calum Chambers if Freddie does go with a three. Hector Bellerin is likely to be fit after narrowly missing the City game with a minor hamstring issue. Ainsley Maitland-Niles is on stand-by if Bellerin is once again ruled out.

Midfield: Granit Xhaka is expected to be available again after missing the last two matches with concussion and I wouldn’t be surprised to see him immediately recalled in the middle of the park.

Lucas Torreira could keep his place alongside Xhaka with Matteo Guendouzi the man to make way. Joe Willock will also be an option on the bench but Dani Ceballos is still out with a hamstring injury.

Attack: The switch in formation would see one attacker drop out. Pierre-Emerick Aubameyang should once again lead the line up front despite reports circulating in the media suggesting he’s eyeing a move away from Arsenal this winter. Alexandre Lacazette may have to settle for a place on the bench once again.

Nicolas Pepe should keep his place in the Gunners attack as he’s been one of our best outfield players recently but Ljungberg will have a decision to make over who’ll join Pepe and Aubameyang in the front three.

Gabriel Martinelli probably deserves to keep his place as the Brazilian youngster has been a breath of fresh air since joining the club but I have a feeling Mesut Ozil will start meaning Martinelli has to settle for a place on the bench. 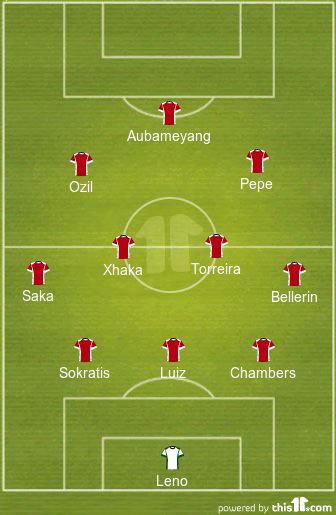