Chelsea take on Newcastle United at St James’ Park on Saturday evening. Here is the team we expect Frank Lampard to select for the game:

Chelsea take on Newcastle United at St James’ Park on Saturday evening. Here is the team we expect Frank Lampard to select for the game:

Goalkeeper: I don’t think there is any point deliberating for too long over who’ll start in goal for Chelsea as Kepa Arrizabalaga is certain to keep his place with Willy Caballero on the bench.

Defence: Reece James could keep his place at right-back after putting-in an excellent performance against Burnley last weekend so Cesar Azpilicueta may remain at left-back meaning Emerson Palmeiri misses out.

Chelsea could make a change in the middle of the back four with Kurt Zouma pushing for a recall. Antonio Rudiger is expected to keep his place so Andreas Christensen may be the man to make way. Fikayo Tomori may also have to settle for a place among the subs.

Midfield: Lampard failed to provide an update on N’Golo Kante at his press conference after the midfielder missed last weeks win over Burnley with a hamstring injury so it looks like the Frenchman is set to miss out once again this weekend.

Jorginho should keep his place in the deep lying playmaker role but Mateo Kovacic could be recalled after being named on the Chelsea bench last time out. Mason Mount should retain his spot so Ross Barkley could be the man to make way for Kovacic.

Attack: Tammy Abraham will lead the line up front once again for Chelsea tomorrow evening so Michy Batshuayi will have to make do with a place among the substitutes. Olivier Giroud is unlikely to be involved as he continues to discuss a move away from the club.

Christian Pulisic is at least two weeks away from returning from a groin injury so Callum Hudson-Odoi should keep his place in the Chelsea attack. Willian is also expected to start ahead of Pedro with the Spaniard named on the bench. 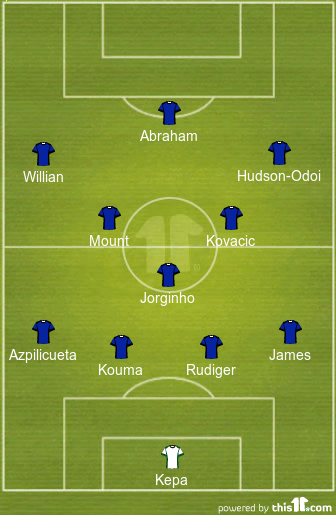