Goalkeeper: Arsenal No.1 Bernd Leno is expected to retain his place between the sticks with Emi Martinez once again on the bench.

Defence: Arteta has been handed a blow with the news that Sead Kolasinac has been ruled out until after the winter break next month due to a thigh injury that he sustained in training last week. With Kieran Tierney will recovering from shoulder surgery, Bukao Saka will continue to fill-in at left-back against Chelsea.

Hector Bellerin is in contention after overcoming a hamstring injury but he’s lacking match fitness so I don’t think Arteta will throw him into the first team just yet. Therefore, Ainsley Maitland-Niles is set to continue at right-back with Bellerin on the bench.

Sokratis should be available again after missing Arsenal’s 1-1 draw with Sheffield United on Saturday due to illness. Shkodran Mustafi is the man set to make way as David Luiz should start against his former club.

Midfield: Matteo Guendouzi is pushing for a recall after being named on the bench in recent games. Dani Ceballos is also an option for Arsenal after recovering from a hamstring injury that’s kept him on the sidelines for over a month.

However, I think Arteta will stick with what’s become his preferred midfield so Lucas Torreira should continue alongside Granit Xhaka in the middle of the park at Stamford Bridge tomorrow night.

Attack: Arsenal will still be without the services of Pierre-Emerick Aubameyang as our top scorer will serve the second of his three-match suspension following his sending off against Crystal Palace.

Gabriel Martinelli replaced the Gabon hitman at the weekend and he’s expected to keep his place after getting on the score-sheet versus Sheffield United. Reiss Nelson would have been an option had Arteta wanted to freshen things up but he’s been ruled out for around three weeks with a hamstring injury.

Alexandre Lacazette will once again lead the line up front for Arsenal and the Frenchman will be desperate to end his goal drought against Chelsea while Nicolas Pepe should keep his place on the right-wing.

Mesut Ozil is expected to retain his place in the attacking midfield position so Joe Willock will therefore have to settle for a place among the subs once again. 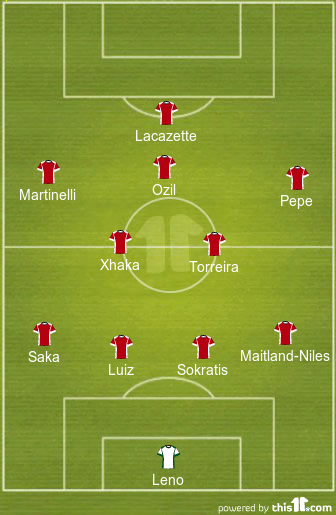