Tottenham take on Chelsea at Stamford Bridge on Saturday afternoon. Here is the side we think Jose Mourinho will select for the game:

Tottenham take on Chelsea at Stamford Bridge on Saturday afternoon. Here is the side we think Jose Mourinho will select for the game:

Goalkeeper: Hugo Lloris made some superb saves to keep Tottenham in their Champions League tie with RB Leipzig on Wednesday night so he’s certain to keep his place tomorrow.

Defence: Mourinho has gone with Davinson Sanchez alongside Toby Alderweireld in recent weeks so that appears to be his favoured centre-back partnership and it’s unlikely he’ll mix things up away to Chelsea.

Serge Aurier is also expected to keep his place at right-back but we could see one change at left-back with Japhet Tanganga coming in for Ben Davies. Juan Foyth has stepped-up his recovery from a groin injury but this game will come too soon.

Midfield: Tottenham were poor in midfield during the defeat to Leipzig in midweek so Mourinho may look to freshen things up with Eric Dier pushing for a recall in the middle of the park.

Harry Winks could drop to the bench for Dier while Tanguy Ndombele may also be recalled with January signing Gedson Fernandes making way following a disappointing display in the Champions League.

Moussa Sissoko has commenced on-field training as he steps up his rehabilitation following knee surgery but the Frenchman won’t be involved against Chelsea this weekend.

Attack: Tottenham have major issues up front as Hueng-min Son has been ruled out for several weeks with a broken arm while Harry Kane isn’t due to return from a hamstring injury until April so Mourinho is limited options through the middle.

Lucas Moura is expected to lead the line up front with Steven Bergwijn offering support. Erik Lamela made a late appearance off the bench in midweek but he’s still lacking fitness having only recently recovered from injury so he may have to settle for a place on the bench tomorrow.

Dele Alli should keep his place and Tottenham will be looking for him to step-up and provide a goal threat against Chelsea. Giovani Lo Celso is expected to start and he may play from a wider position with Ryan Sessegnon among the subs. 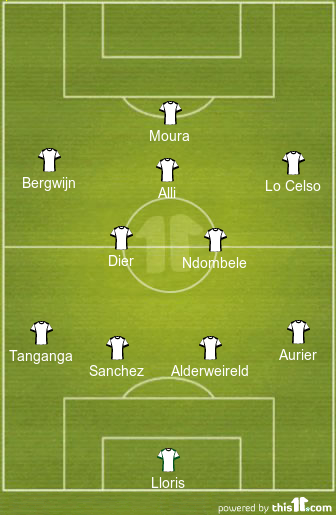