Chelsea take on West Ham at the London Stadium on Wednesday night. Here is the team we expect Frank Lampard to select for the game:

Chelsea take on West Ham at the London Stadium on Wednesday night. Here is the team we expect Frank Lampard to select for the game:

Goalkeeper: Kepa Arrizabalaga is set to be recalled after being rested for the FA Cup win at Leicester City. Willy Caballero will make way after starting at the King Power.

Defence: Andreas Christensen remains a doubt after missing the Leicester game with a groin issue so Kurt Zouma could keep his place alongside Antonio Rudiger in the middle of the Chelsea back four.

Cesar Azpilicueta will be recalled at right-back after being given a well-earned breather at the weekend Reece James will make way. Emerson is also expected to drop out with Marcos Alonso recalled at left-back.

Midfield: Jorginho has been left out in recent weeks so it looks like Lampard will go again without the Italian international tomorrow night meaning N’Golo Kante should keep his place in the holding midfield role.

Billy Gilmour is expected to drop to the bench after starting against Leicester as Mateo Kovacic should be recalled in midfield. Ross Barkley came off the bench to score the winner at the weekend so he may have played his way into the Chelsea line-up for tomorrow’s game.

Attack: Christian Pulisic is a doubt after suffering a calf injury on Sunday so we could see Mason Mount moving to a wider role in the Chelsea attack. Pedro is another option but I think Mount will get the nod.

Callum Hudson-Odoi is close to being back in contention following an ankle injury but he’s unlikely to start. Ruben Loftus-Cheek is an option for Lampard but I think Willian will keep his place on the right wing. 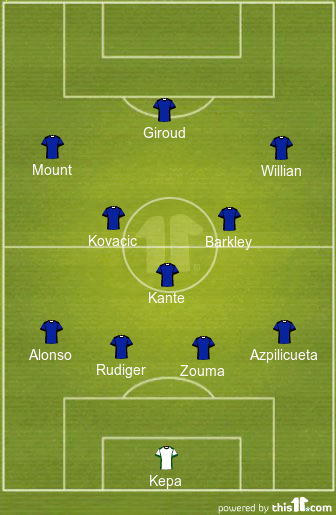