Chelsea take on Watford at Stamford Bridge on Saturday night. Here is the team we expect Frank Lampard to select for the game:

Goalkeeper: Kepa Arrizabalaga was criticised for his part in Chelsea’s defeat at West Ham on Wednesday night but the Spaniard is still expected to keep his place between the sticks tomorrow with Willy Caballero on the bench.

Defence: Chelsea will continue to be without Fikayo Tomori as he’s still nursing a muscle injury. Kurt Zouma is pushing for a recall but I think Lampard will stick with Andreas Christensen alongside Antonio Rudiger in the middle of the back four.

Marcos Alonso could be dropped after a disappointing performance against the Hammers. Emerson is an option to come in but I think Cesar Azpilicueta will move across to left-back with Reece James recalled at right-back this weekend.

Midfield: Chelsea have been dealt a fresh blow with the news that Mateo Kovacic has been ruled out of the clash with Watford after picking up an Achilles injury during the defeat to West Ham last time out.

Kovacic was forced off early in the second half at the London Stadium and is now expected to miss at least two games so Jorginho could be given a recall tomorrow having not started any of Chelsea’s last four matches in all competitions.

N’Golo Kante should keep his place but he may play a little further forward in midfield if Jorginho is recalled. Ross Barkley put-in a below par display in midweek so he may drop to the bench with Mason Mount pushing for a recall.

Billy Gilmour is another option for Lampard but I think the youngster will start from the bench against Watford while Ruben Loftus-Cheek is also expected to settle for a place among the substitutes.

Attack: Willian scored two goals against West Ham, including a stunning free-kick, so the Brazilian international deserves to keep his place in the Chelsea attack this weekend.

Christian Pulisic is likely to start from the left wing as he’s been enjoying some fine form in recent weeks so Callum Hudson-Odoi and Pedro will battle for places on the bench.

Tammy Abraham has been struggling in front of goal lately so I wouldn’t be surprised to see him dropping out tomorrow after a poor showing at West Ham. Olivier Giroud will be the man to come in up front. 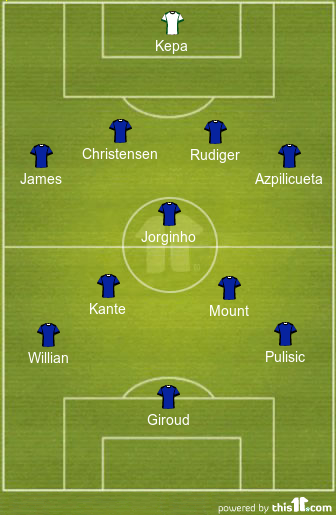