Arsenal take on Tottenham at the Tottenham Hotspur Stadium on Sunday afternoon. Here is the team Gooner Mac expects Mikel Arteta to select:

Goalkeeper: Bernd Leno is still out as he continues to recover from a knee injury. Emi Martinez has done a terrific job filling-in for Leno so he’ll keep his place between the sticks on Sunday.

Defence: Arteta seems to have found his preferred defensive set-up as he’s deployed a settled back three in recent weeks and I don’t see him changing things against Tottenham this weekend.

Therefore, I expect we’ll see David Luiz once again starting in the middle of the defence with Sead Kolasinac playing on the left side. He hasn’t looked comfortable in a back three at times but he does provide some balance to the side.

Shkodran Mustafi has been in great form lately so he deserves to keep his place meaning the likes of Sokratis and Rob Holding will be named among the substitutes once again. Pablo Mari and Calum Chambers remain out with a ankle and knee injuries respectively.

Midfield: Cedric Soares was given a rest against Leicester on Tuesday night having made his full debut for Arsenal last weekend but I think we might see him recalled against Tottenham. Arteta is clearly a fan and Hector Bellerin hasn’t been excelling in the wing-back role consistently so we might see Soares coming in on Sunday.

Kieran Tierney has been in superb form over the past few games so I expect him to keep his place while Granit Xhaka should once again start for Arsenal in the middle of the park against Tottenham.

Lucas Torreira is an option for Arteta after returning to full fitness but Dani Ceballos has been playing extremely well of late and is forming a good understanding with Xhaka so I think he’ll keep his place.

Mateo Guendouzi has been frozen out of the squad and has been training away from the first team following a bust-up with Arteta so I don’t expect to see him involved against Tottenham.

Attack: Mesut Ozil is another play who has seemingly been axed by the boss as he hasn’t played a single minute since the restart. The official line is he’s carrying a ‘back issue’ but either way I’d be surprised to see him recalled on Sunday.

Bukayo Saka’s excellent form continued as he grabbed a fine assist for Arsenal’s goal against Leicester and I think he’ll continue on the right wing with Nicolas Pepe and Reiss Nelson on the bench.

Pierre-Emerick Aubameyang is expected to continue on the left side of the front three after scoring in midweek while Alexandre Lacazette will once again lead the line up front as Eddie Nketiah will begin a three-match suspension after being sent off against the Foxes.

Gabriel Martinelli remains unavailable as the Brazilian youngster won’t play again this season due to a knee injury but Joe Willock should be an option from the bench. 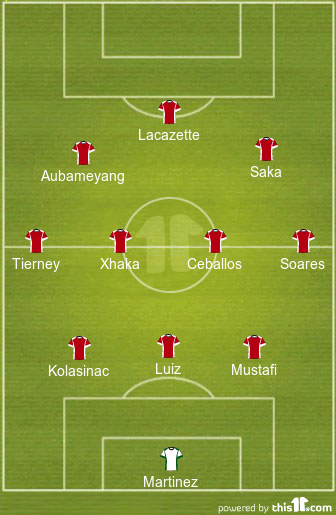