– Scott McTominay could be recalled when Manchester United face Southampton

Manchester United take on Southampton at Old Trafford on Monday evening. Here is the line-up we think Ole Gunnar Solskjaer will select for the game:

Goalkeeper: David De Gea is certain to keep his place between the sticks tomorrow night so Sergio Romero will remain on the bench.

Defence: Victor Lindelof recovered from a back injury to start during the win over Aston Villa last week so he should be fit to line-up alongside Harry Maguire once again tomorrow. That means Eric Bailly will have to settle for a place on the Man Utd bench but Phil Jones and Axel Tuanzebe remain on the sidelines due to injury issues.

Luke Shaw has been enjoying a fine run in the first team over the past few weeks so I don’t see Solskjaer making any changes at left-back while Aaron Wan-Bissaka should also keep his place at right-back against Southampton.

Midfield: Solskjaer has hinted he won’t be making too many changes to his side having named an unchanged line-up for the past four matches, however, we could see one player recalled in midfield with Scott McTominay coming in.

Nemanja Matic is the man most likely to make way tomorrow night as may need a breather while Paul Pogba should keep his place following an excellent goal-scoring performance against Aston Villa last time out.

Bruno Fernandes was also on target again from the penalty spot against Villa so he’s expected to start in the attacking midfield role meaning the likes of Juan Mata and Andreas Pereira will have to settle for places on the bench.

Attack: Mason Greenwood scored an outstanding goal against Villa and he’s forced his way into Solskjaer’s first team with some terrific performances so I don’t see any need for the Man Utd boss to leave him out tomorrow.

Marcus Rashford is expected to start on the left side of attack with Anthony Martial through the middle so Odion Ighalo and Daniel James will be named among the substitutes against Southampton. 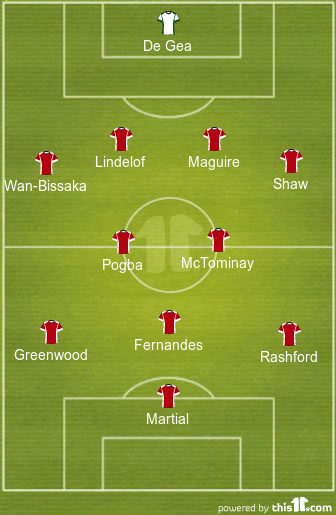