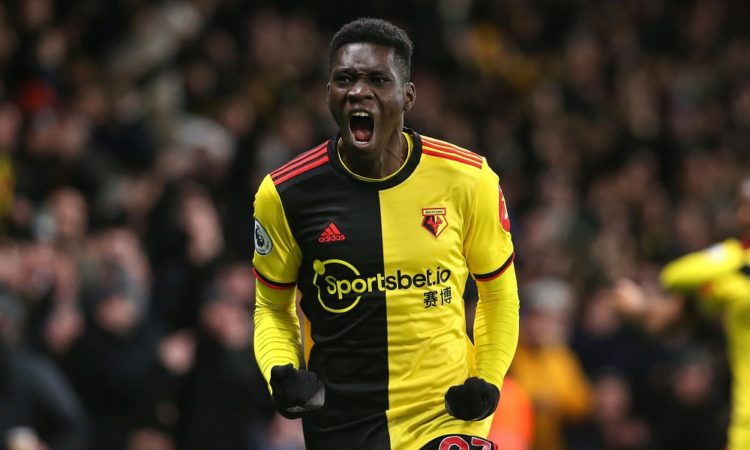 Manchester United could still sign Ismaila Sarr this month as Watford look to cash-in on the £45m winger before the Football League transfer deadline next week, according to the Manchester Evening News.

Sarr was linked with a move to Old Trafford during the closing weeks of the summer transfer window after being identified by Ole Gunnar Solskjaer as an alternative to Jadon Sancho and Ousmane Dembele.

United were unable to agree terms with Borussia Dortmund over a deal for first choice target Sancho and failed to get a loan deal agreed with Barcelona for Dembele before the window closed at 11pm on Monday night.

Solskjaer has been desperately trying to sign a top class right winger in recent months and the Manchester Evening News claims Man Utd also saw a bid to sign Sarr knocked back by Watford on deadline day.

The outlet says United offered to sign the 22-year-old on an initial season long loan with an option to make the move permanent for £25m next summer but the Hornets weren’t interested in such an arrangement.

Instead, Watford demanded a permanent deal this summer and the M.E.N claims the Championship outfit are still looking to cash-in on Sarr before the Football League transfer closes later this month.

Premier League clubs can still do business with clubs in the EFL until October 16th so Man Utd could yet do a deal to sign Sarr – although the M.E.N says Watford want £45m for the attacker.

Solskjaer didn’t get the established right winger he wanted so the United boss may be tempted to bring-in Sarr over the coming week but it remains to be seen whether Old Trafford bosses would sanction a big-money permanent deal.

The Manchester giants splashed out on highly-rated winger Facundo Pellistri on Monday with the 18-year-old signed from Penarol while Amad Diallo will arrive in January after a deal worth up to £37m was agreed with Atalanta.

With two exciting young attackers already signed, it seems unlikely Man Utd will go back in for Sarr, especially as Watford are demanding £45m for the Senegal international.

Not only that, Sarr wouldn’t be eligible for the Champions League group stages as he needed to be registered by Tuesday so I think it’s unlikely we’ll see Manchester United renew their interest in the Watford ace over the coming days.