The international break is over and Arsenal travel to the Etihad to take on Man City on Saturday evening. Here is the team Gooner Mac expects Mikel Arteta to select:

Goalkeeper: Bernd Leno will continue in goal this weekend with summer signing Alex Runarsson expected to act as back-up from the bench.

Defence: Arteta is expected to stick with his system of lining-up with a back three when defending and moving to a four when attacking but Arsenal could be without one of their key players this weekend.

Kieran Tierney is a major doubt as he’s been forced to self-isolate in Scotland after one of his international team-mates tested positive for Covid-19. Tierney himself has tested negative and Arsenal haven’t given up hope of persuading the Scottish Government to allow him to travel back to England but at this point it looks unlikely Tierney will be involved on Saturday.

That means Rob Holding could be recalled to start in the back three alongside Gabriel and David Luiz. Pablo Mari, Shkodran Mustafi and Calum Chambers all remain out through injury while Sokratis is out of favour.

Midfield: The big question is whether Thomas Partey will make his Arsenal debut after joining the club from Atletico Madrid on deadline day. The midfielder only took part in his first full training session today so I think it’s unlikely he’ll be thrown-in to start at Man City but he should be on the bench.

If Partey isn’t risked from the start then Dani Ceballos should keep his place in the middle of the park while Granit Xhaka should be recalled to start after being named on the bench against Sheffield United last time out. That would see Mohamed Elneny dropping to the bench while youngster Joe Willock will hope to keep his place in the squad.

Hector Bellerin should continue on the right flank while Ainsley Maitland-Niles may be given the nod ahead of Bukayo Saka in the left wing-back role as Arsenal will want more defensive solidity at the Etihad.

Attack: Pierre-Emerick Aubameyang was forced to pull out of international duty after picking up a minor ankle problem against Sheffield United but the Arsenal skipper is expected to recover in time to start on Saturday.

Alexandre Lacazette should be recalled to lead the line up front with Eddie Nketiah dropping to the bench while Willian could get the nod ahead of Nicolas Pepe on the right side of attack.

Mesut Ozil continues to be frozen out by Arteta while Gabriel Martinelli remains injured but Reiss Nelson is another option for the Arsenal manager. 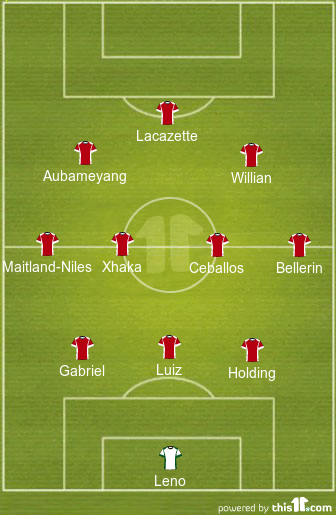