Arsenal continue their Europa League group stage campaign when they take on Dundalk at the Emirates Stadium this evening.

The Gunners opened up with a hard fought 2-1 victory over Rapid Vienna last week with Pierre-Emerick Aubameyang called off the bench to secure the comeback win after the hosts had taken the lead early in the second half.

Mikel Arteta’s men can now take control of Group B with another victory over Dundalk on home soil this evening but Arsenal will need to step things up after a couple of questionable performances over the past week.

The north Londoners were poor in Vienna and slumped to a 1-0 Premier League defeat to Leicester City at the Emirates on Sunday so Arteta will be keen to get back on track with a dominant display tonight.

Dundalk on the other hand arrive in the capital having lost their opening group game 2-1 to Molde so the Irish outfit will be looking to pull off a shock result on what will be one of the biggest nights in their history.

Arsenal will be without David Luiz after the club confirmed the defender was ruled out with a muscle injury that he sustained against Leicester last time out so Shkodran Mustafi is expected to be recalled at the back.

Arteta has seen his options at centre-back decimated as Rob Holding, Calum Chambers and Pablo Mari are all still unavailable while Sokratis and William Saliba aren’t eligible in the Europa League.

The Gunners are expected to rest several key players with the likes of Aubameyang, Granit Xhaka, Thomas Partey, Hector Bellerin, Kieran Tierney and Bernd Leno set to be left out ahead of Sunday’s trip to Man Utd.

Alex Runarsson could be given his debut in goal while Cedric Soares, Mo Elneny, Joe Willock, Reiss Nelson and Eddie Nketiah are pushing for recalls. Willian is available but may not be risked while Gabriel Martinelli is still working his way back from a knee injury.

Dundalk are set to recall goalkeeper Gary Rogers but Nathan Oduwa is a doubt with a hamstring injury and Dane Massey is out with a hip problem. 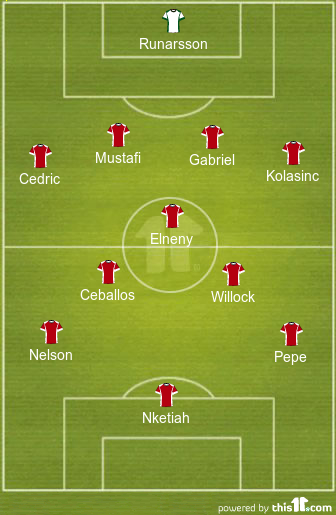 Arsenal 3-0 Dundalk: Despite fielding a severely weakened team with Arteta understandably having one eye on Sunday’s huge clash with Manchester United, Arsenal should still have way too much quality for Dundalk.

Nketiah, Pepe and Nelson will all be keen to impress and should be able to create plenty of chances against the Irish minnows at the Emirates so I’m predicting a comfortable 3-0 victory for the Gunners tonight.