Tottenham Hotspur will be looking to return to winning ways when they take on Brighton and Hove Albion at home in the Premier League on Sunday [Kick-0ff 19:15 pm].

Spurs lost 1-0 against Belgian outfit Royal Antwerp in midweek in the Europa League clash, and Jose Mourinho will be demanding a strong response from his players.

The Portuguese coach was frustrated with the performance and said afterwards that he would make tough choices in team selection going forward. He made a total of nine alterations for the game in Belgium, and the Spurs boss is expected to rotate the squad again with several key players likely to return. Here is the team we expect Mourinho to select for the game:

Goalkeeper: Hugo Lloris, the first-choice goalkeeper, started in midweek against Antwerp and the Frenchman is likely to continue between the sticks against Brighton tomorrow.

Defence: Eric Dier was rested for the game in midweek and the England international is likely to return along with Belgian defender Toby Alderweireld, replacing Ben Davies and Davinson Sanchez at the back. Matt Doherty is also expected to feature in place of Serge Aurier, but summer signing Sergio Reguilon should be able to retain his place in the side.

Midfield: Harry Winks and Giovani Lo Celso started against Antwerp where the former was particularly disappointing. Moussa Sissoko should be recalled while Mourinho is also likely to replace Winks with summer signing Pierre-Emile Hojbjerg.

The likes of Dele Alli, Steven Bergwijn and Gareth Bale were very disappointing during the Europa League clash, and the trio are likely to be dropped on Sunday, with Son Heung-min, Lucas Moura and Tanguy Ndombele set to return to the starting line-up.

Ndombele was given a rest in the last game after he felt a little bit of fatigue but Mourinho expects the 23-year-old midfielder to return.

Forward: Carlos Vinicius failed to make an impact in his second start for the club in Belgium, and he is likely to make way for Harry Kane.

Here is how we expect Tottenham to line-up: 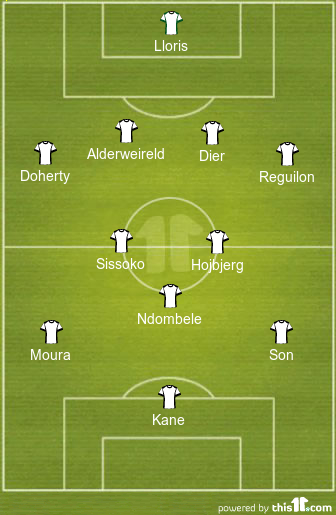