Arteta to make 7 changes but does Partey start? | Expected Arsenal line-up vs Palace

Arsenal take on Crystal Palace at the Emirates Stadium on Thursday evening. Here is the team Gooner Mac expects Mikel Arteta to select:

Goalkeeper: Number one goalkeeper Bernd Leno is certain to keep his place between the sticks so Alex Runarsson will once again be named on the bench.

Defence: Arsenal are expected to welcome Gabriel back into the squad after he returned to full training but the centre-back might not be risked from the start after missing the last four matches. Pablo Mari has performed very well during Gabriel’s absence so I wouldn’t be surprised to see him keep his place on Thursday night.

Rob Holding has enjoyed a good run of games in the first team this season and he’ll be looking to celebrate his new contract with another start against Palace. That means David Luiz could drop out.

Kieran Tierney should keep his place at left-back as he’s been one of Arsenal’s most consistent performers this season while Hector Bellerin should be recalled at right-back after he was rested against Newcastle in the FA Cup last time out.

Midfield: Thomas Partey could be back in contention after returning to full training recently but I don’t think Arteta will risk him from the start so a place on the bench is perhaps the best he can hope for tomorrow night.

Granit Xhaka and Dani Ceballos were rested for the FA Cup win at the weekend so they should be recalled with Mo Elneny and Joe Willock making way. Emile Smith Rowe is also pushing for a recall and he’ll be in confident mood after scoring off the bench on Saturday. Willian is the man set to make way after another poor performance in the No.10 role against Newcastle.

Attack: Arsenal should make changes in attack tomorrow with Bukayo Saka and Alexandre Lacazette both expected to be recalled. Nicolas Pepe and Reiss Nelson are the men set to drop out after they started against Newcastle.

Pierre-Emerick Aubameyang was on the scoresheet at the weekend and the Gabon hitman will keep his place against Palace – although he’s likely to start from the wing if Lacazette is recalled up front. 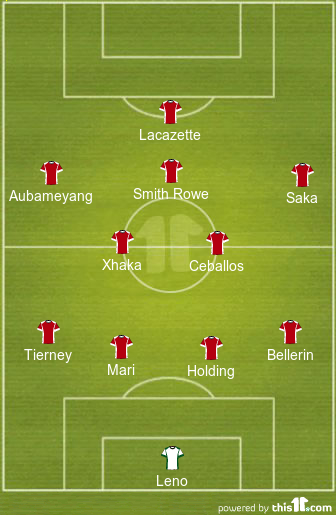