Arsenal are back at St Mary’s Stadium to take on Southampton in the Premier League this evening. Here is the team Gooner Mac expects Mikel Arteta to select:

Goalkeeper: Bernd Leno started at the weekend and he’s certain to keep his place between the sticks tonight with new signing Mat Ryan expected to be his understudy on the bench.

Defence: Arsenal are set to make a couple of changes in defence with Kieran Tierney recalled at left-back after he was rested for the 1-0 defeat to Southampton in the FA Cup on Saturday afternoon. Cedric Soares is likely to be the man to make way with Hector Bellerin keeping his place at right-back.

Gabriel looked a little rusty at the weekend, which is understandable given how little football he’s played recently, so the Brazilian is expected to drop back to the bench tonight with David Luiz recalled to start alongside Rob Holding. Pablo Mari remains out with a calf injury so he won’t be involved.

Midfield: Thomas Partey was a second half substitute on Saturday and he made a big impression off the bench so the Ghanaian international is expected to be recalled to start against Southampton this evening.

Granit Xhaka should keep his place in the Arsenal midfield so Dani Ceballos will have to settle for a place on the bench if he can shake-off a calf issue while Mohamed Elneny will also be named among the substitutes.

Martin Odegaard is widely expected to complete his move to Arsenal today but the Norwegian isn’t likely to be involved tonight. Emile Smith Rowe should be recalled to start after he was rested at the weekend so he’ll line-up in the attacking midfield role.

Attack: Arsenal will be without Pierre-Emerick Aubameyang as the striker is dealing with a personal issue and Arteta isn’t sure how long his skipper will be out for so he’ll be a huge miss in attack tonight.

Willian put-in another disappointing performance at the weekend and Nicolas Pepe also failed to take his chance to shine so both are expected to drop to the bench with Bukayo Saka recalled to the starting line-up.

Gabriel Martinelli could keep his place in the Arsenal attack while Alexandre Lacazette is expected to replace Eddie Nketiah up front. 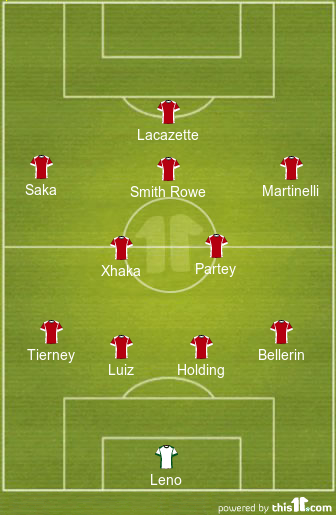