Arsenal take on Benfica in the first leg of their Europa League tie on Thursday night. Here is the team Gooner Mac expects Mikel Arteta to select:

Goalkeeper: Bernd Leno only featured in two of Arsenal’s six group stage games but our No.1 is expected to start in the knockout stages and should keep his place between the sticks tomorrow night. Mat Ryan will be his back-up from the bench.

Defence: Kieran Tierney has returned to training this week after missing the last six games with a knee injury, however, Arteta is unlikely to risk the Scottish international from the start after being out for over a month so Cedric Soares should keep his place at left-back.

Hector Bellerin is expected to start once again for Arsenal at right-back while David Luiz is likely to keep his place in the middle of the back four but we could see one change in defence with Rob Holding recalled in place of Gabriel.

Midfield: Arsenal will continue to be without Thomas Partey as the midfielder is still nursing a thigh injury that he picked up earlier this month. Dani Ceballos was excellent during the win over Leeds United last weekend so he should keep his place alongside Granit Xhaka with Mo Elneny among the subs.

Martin Odegaard impressed on his full debut at the weekend and he’ll be hoping he did enough to keep his place. Emile Smith Rowe has been excellent since breaking into the side but he’s looked a little tired recently so he might get a rest with Odegaard starting in the No.10 position tomorrow.

Attack: Pierre-Emerick Aubameyang was back to his best with a hat-trick against Leeds but he picked up an ankle knock during the closing stages of the game. The Gabon hitman has trained in recent days and should keep his place up front if he’s deemed fully fit.

That means Alexandre Lacazette will have to settle for a place on the bench against Benfica. Bukayo Saka should start on the right wing as he was superb once again during the win over Leeds.

If Smith Rowe is given a breather, then we should see Nicolas Pepe handed a recall on the left side of the Arsenal front three. He’s been in fine form recently and was rested at the weekend so he’ll be fresh. Gabriel Martinelli and Willian are expected to be named among the substitutes. 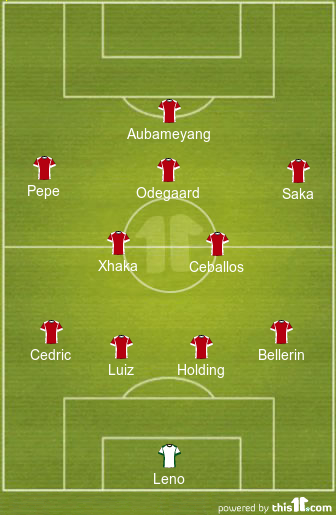