Arsenal take on Benfica in the last-16 of the Europa League on Thursday evening. Here is the team Gooner Mac expects Mikel Arteta to select:

Arsenal will be looking to book their place in the last-16 of the Europa League when they take on Benfica on Thursday evening. Here is the team Gooner Mac expects Mikel Arteta to select:

Goalkeeper: Bernd Leno started in the first leg last week and is expected to keep his place between the sticks tomorrow so Mat Ryan will remain on the bench.

Defence: Arsenal will be without Rob Holding after he was forced off during the defeat to Manchester City on Sunday with concussion while Pablo Mari is expected to make way with Gabriel and David Luiz recalled in the middle of defence.

Kieran Tierney made a successful return to the starting eleven at the weekend having recovered from a knee injury so he’s likely to keep his place at left-back with Hector Bellerin once again on the right. That means Cedric Soares may have to settle for a place on the bench.

Midfield: Arsenal have been handed a boost as Thomas Partey returned to full training this week after recovering from a thigh injury. The Ghanaian international has travelled to Athens for the game but Arteta may not risk him from the start due to Partey’s recent injury problems and the fact he’s only just resumed training so he may have to make-do with a place among the substitutes.

Granit Xhaka will once again start for Arsenal and Dani Ceballos is expected to be recalled to line-up alongside the Swiss international after he was rested on Sunday. Mohamed Elneny will be the man to make way.

Attack: Emile Smith Rowe is pushing for a recall after he was rested on Sunday. Martin Odegaard could keep his place as he’s impressed since arriving on loan from Real Madrid last month so Nicolas Pepe could drop to the bench tomorrow.

Bukayo Saka is almost certain to keep his place in the Arsenal attack as he’s been our best player in recent months while Pierre-Emerick Aubameyang is likely to start up front despite a poor performance in each of his last two games.

That means Alexandre Lacazette will remain on the bench where he’ll be joined by the likes of Gabriel Martinelli and Willian. 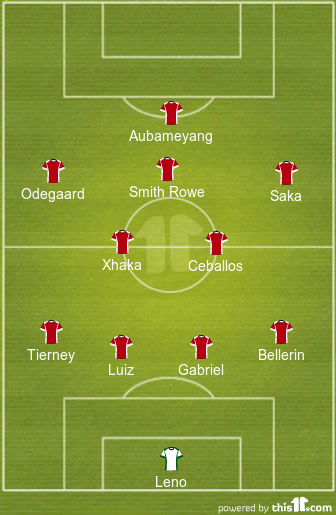