Arsenal take on Burnley at Turf Moor on Saturday afternoon. Here is our match preview with team news, line-ups and prediction

Arsenal desperately need a win to push them closer to the European places when they take on Burnley at Turf Moor on Saturday afternoon.

The Gunners earned an impressive 3-1 victory over Leicester City at the King Power last weekend but we still languish down in 10th place in the Premier League table following a disappointing campaign.

A win tomorrow could move Arsenal up to ninth and to within two points of eighth-placed Tottenham but sixth-placed West Ham are currently eight points ahead so there isn’t much room left for manoeuvre if we want to qualify for Europe via the league.

Mikel Arteta may feel his best bet is to concentrate on the Europa League with a very winnable last-16 tie with Olympiacos coming up but we cannot put all our eggs in one basket so still need to do all we can to secure a win tomorrow.

Burnley come into the match off the back of three draws and a defeat in their last four games and they sit 15th in the table – six points above the drop zone – so Sean Dyche will be keen to get back to winning ways to boost their survival hopes.

Arsenal have virtually a fully-fit squad to choose from as Emile Smith Rowe is the only injury concern heading into the game. The attacker picked up a minor muscle issue last week so he’ll face a late fitness test.

Arteta is expected to rotate his team with the likes of Bukayo Saka, Hector Bellerin, Gabriel, Thomas Partey, Martin Odegaard and Pierre-Emerick Aubameyang all pushing for recalls.

Kieran Tierney could be given a rest ahead of Arsenal’s crucial Europa League last-16 first leg tie with Olympiacos next Thursday.

As for Burnley, Jack Cork could return to the squad after recovering from a hamstring issue while Johann Berg Gudmundsson and Robbie Brady are also doubts. Ashley Barnes is certain to miss the game with a long-term issue. 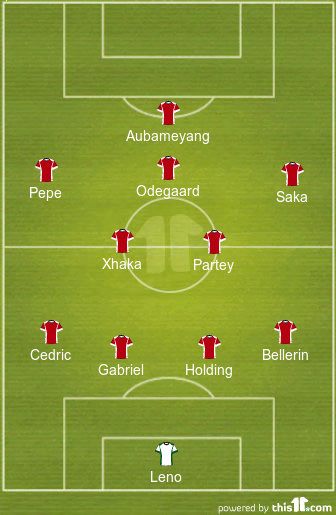 Burnely 1-2 Arsenal: Burnley came away with a shock 1-0 at the Emirates earlier in the season but Arsenal are in a far better place now and I don’t expect us to lose again tomorrow. We’ve conceded just seven goals in our last 13 league meetings with Burnley and have won four of our last six league matches away from home so I’m confident we can secure all three points.

As long as the players don’t have one eye on the Olympiacos game, I’m backing Arsenal to beat Burnley 2-1 at Turf Moor.