Arsenal take on Fulham at the Emirates Stadium on Sunday afternoon. Here is our preview with team news, line-ups and prediction

Arsenal are back in Premier League action when they take on Fulham at the Emirates Stadium on Sunday afternoon.

The Gunners produced one of their best performances of the season to blow Slavia Prague away 4-0 on Thursday night. The victory in the Czech Republic booked Arsenal’s place in the semi-finals of the Europa League where they’ll now face Unai Emery’s Villarreal.

However, Arsenal are still struggling in the Premier League as they head into this game sitting ninth in the table having won just 13 of their 31 league games so far this campaign.

A 3-0 win at Sheffield United last weekend kept alive hopes of a late push for a European qualification place and Arsenal can move to within just two points of seventh placed Tottenham with a win tomorrow afternoon.

Mikel Arteta should be confident of collecting all three points at the Emirates as the north Londoners will be up against a Fulham side who sit 18th in the division and come into the game off the back of four consecutive defeats.

Arsenal will be without captain Pierre-Emerick Aubameyang for the third consecutive game after it was confirmed he contracted malaria while away with the Gabon squad during the March international break.

Martin Odegaard is also out due to an ankle injury that’s hampered him since last month while David Luiz and Kieran Tierney remain on the sidelines with knee injuries.

Arteta could make some changes to his starting eleven with the likes of Gabriel, Cedric Soares, Hector Bellerin and Gabriel Martinelli pushing for recalls.

As for Fulham, they’ll be without Terence Kongolo for the rest of the season while Tom Cairney is also absent with a knee injury. However, Ademola Lookman is available after recovering from a thigh problem. 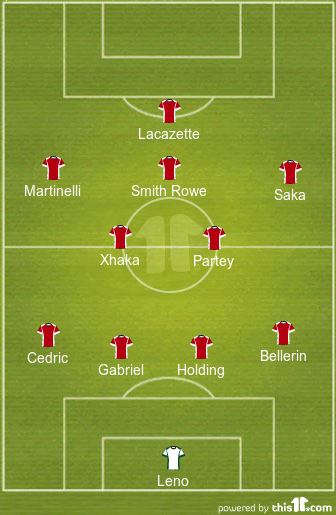 Arsenal 3-0 Fulham: Arsenal haven’t lost at home to Fulham in their last 29 meetings and have won the previous three matches with an aggregate score of 12-2 so they’ll be confident of extending that run tomorrow.

The Gunners have been excellent in their last two matches and should have too much quality for a struggling Fulham side. In the absence of Aubameyang, Alexandre Lacazette has stepped-up for Arsenal and I can see him putting Fulham to the sword this weekend.