Chelsea get back to Premier League action when they take on Aston Villa at Stamford Bridge on Saturday. Here is the team we expect Thomas Tuchel to select

Chelsea get back to Premier League action when they take on Aston Villa at Stamford Bridge on Saturday evening. Here is the team we expect Thomas Tuchel to select for the game:

Goalkeeper: Edouard Mendy should keep his place between the sticks this weekend so Kepa Arrizabalaga will have to settle for a place among the substitutes against Villa.

Defence: Chelsea have an issue in defence as Thiago Silva is expected to miss out tomorrow after FIFA imposed a five-day ban on all players who failed to report for international duty. Some reports suggest Chelsea, and other Premier League clubs, may defy FIFA’s ban by selecting their Brazilian stars anyway but as it stands Silva is set to be ruled out this weekend.

Therefore, Trevoh Chalobah could be recalled to start alongside Andreas Christensen and Antonio Rudiger in Chelsea’s back three. Kurt Zouma is obviously no longer available after completing a move to West Ham on deadline day.

Midfield: Chelsea will be without Reece James as he’ll begin his suspension following his sending off against Liverpool before the international break. Callum Hudson-Odoi is an option in the right wing-back position but Tuchel may opt to go with Cesar Azpilicueta.

Marcos Alonso started at Anfield last time out but Ben Chilwell is pushing for a recall and could return on the left flank this weekend.

Chelsea are set to be without N’Golo Kante as the Frenchman is still recovering from an ankle injury that he sustained against Liverpool. New signing Saul Niguez is available but he’s likely to start from the bench with Mateo Kovacic lining-up alongside Jorginho against Villa.

Attack: Chelsea have been handed a major boost as Romelu Lukaku has been declared fit and available for selection after a minor thigh issue while away with Belgium during the international break. The former Inter Milan striker should therefore keep his place up front.

Mason Mount should retain his place in the attack while Kai Havertz is favourite to support Lukaku after scoring against Liverpool last time out. Christian Pulisic has been ruled out for 10 days with an ankle injury that he picked up while away with the US squad.

However, Hakim Ziyech and Timo Werner are options for Tuchel in attack – although they’re expected to be named on the bench against Villa tomorrow evening. 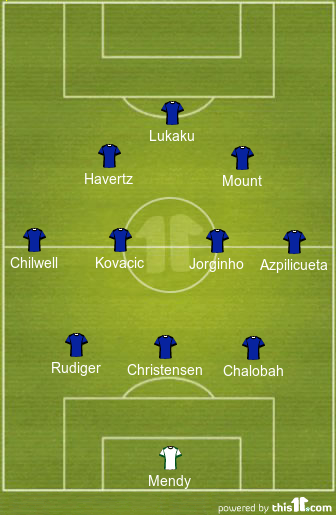