Chelsea take on Zenit St. Petersburg at Stamford Bridge on Tuesday evening. Here is the team we expect Thomas Tuchel to select for the game:

Chelsea start their Champions League group stage campaign when they take on Zenit St. Petersburg at Stamford Bridge on Tuesday evening. Here is the team we expect Thomas Tuchel to select for the game:

Goalkeeper: Edouard Mendy is likely to keep his place between the sticks with Kepa Arrizabalaga having to settle for a place among the substitutes once again.

Defence: Chelsea could make a couple of changes in defence with Cesar Azpilicueta expected to be recalled after being rested for the win over Aston Villa at the weekend. Trevoh Chalobah would be the man to make way despite his solid start to the new season.

Thiago Silva could be given a rest as Tuchel needs to carefully manage the 36-year-old’s fitness so Andreas Christensen is set for a recall alongside Antonio Rudiger tomorrow night.

Midfield: Chelsea will be boosted by the return of Reece James after he missed the Villa game due to suspension. The England international is likely to replace Callum Hudson-Odoi in the right wing-back position.

Ben Chilwell is also pushing for a recall after not starting in the last two Premier League games so Marcos Alonso could drop to the bench against Zenit St. Petersburg on Tuesday night.

Jorginho was rested at the weekend so he’s expected to be recalled for the Champions League tie but Chelsea will continue to be without N’Golo Kante as he’s still recovering from a knock.

Saul Niguez produced a solid debut display but he’s likely to be the man to make way as Mateo Kovacic deserves to keep his place after a superb goal-scoring display against Aston Villa.

Attack: Chelsea have options in attack so Tuchel is expected to take this opportunity to rotate with Mason Mount likely to be recalled after he was named on the bench at the weekend.

Timo Werner is also pushing for a recall so he could replace compatriot Kai Havertz with Hakim Ziyech making way for Mount on the opposite flank. Christian Pulisic remains out with an ankle injury that he picked up on international duty earlier this month.

Romelu Lukaku made a dream return to Stamford Bridge as he scored twice during Chelsea’s 3-0 win over Villa on Saturday evening and the Belgian international is expected to retain his place up front tomorrow. 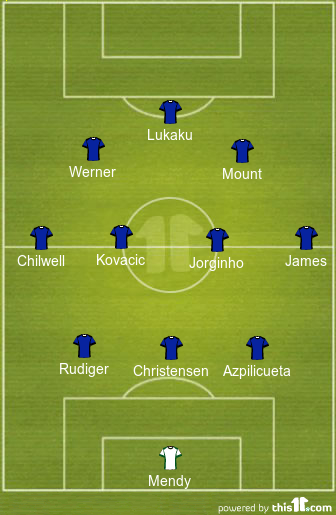