Chelsea travel to North London to take on Tottenham Hotspur on Sunday afternoon. Here is the team we expect Thomas Tuchel to select for the game:

Chelsea get back to Premier League action this weekend when they travel to North London to take on Tottenham Hotspur on Sunday afternoon. Here is the team we expect Thomas Tuchel to select for the game:

Goalkeeper: Edouard Mendy is almost certain to keep his place between the sticks at Tottenham so Kepa Arrizabalaga will have to once again settle for a place among the substitutes.

Defence: Chelsea kept a clean sheet during their 1-0 Champions League victory over Zenit St Petersberg in midweek but they could make at least one change from the side that started at Stamford Bridge.

Thiago Silva was rested for the win on Tuesday night so the experienced Brazilian is expected to be recalled against Spurs to start alongside Antonio Rudiger in Chelsea’s back three.

Andreas Christensen is the man likely to make way for Silva as Cesar Azpilicueta should retain his place in defence. Trevoh Chalobah has started the season well but he’s expected to be named among the substitutes tomorrow.

Midfield: Chelsea have been handed a major boost as N’Golo Kante has been passed fit and is available for selection after recovering from an injury that’s hampered him recently.

Kante is expected to be recalled to line-up alongside Jorginho in the middle of the park against Tottenham so Mateo Kovacic will drop down to the bench where he’ll be joined by on-loan Atletico Madrid midfielder Saul Niguez.

Ben Chilwell appears to have fallen out of favour under Tuchel with Marcos Alonso currently the German coaches first choice in the left wing-back role while Reece James is expected to keep his place on the right flank.

Attack: Romalu Lukaku will once again lead the line up front for Chelsea after scoring the winner in midweek while Mason Mount could keep his place in attack for the visitors.

Tuchel has plenty of other options in the front three with Timo Werner, Hakim Ziyech and Ross Barkley all available for selection but Kai Havertz is expected to be recalled against Tottenham.

Christian Pulisic is stepping up his recovery from a thigh injury but won’t resume full training until next week so the US international will miss the trip to north London this weekend. 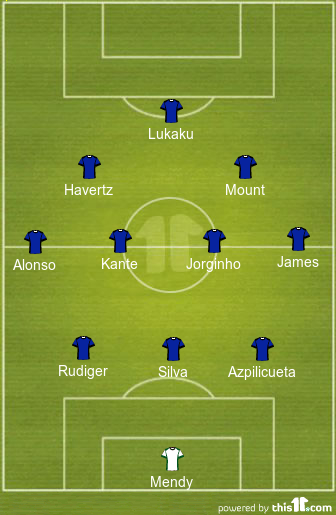