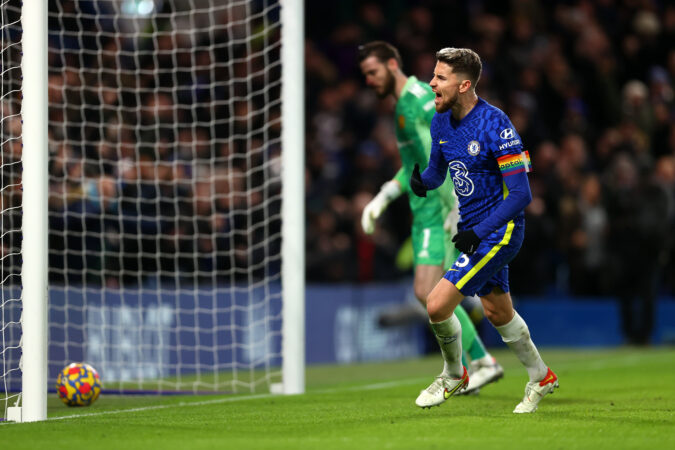 Chelsea manager Thomas Tuchel was pleased with the response from midfielder Jorginho following his blunder against Manchester United in the Premier League.

The Italy international gifted the Red Devils with the opening goal in the 50th minute. He was the last man to provide cover in the centre circle from a set-piece.

His poor first touch from a hoofed clearance handed possession to Jadon Sancho, who ran the length of the pitch before scoring past Edouard Mendy.

The £110k-a-week star managed to make amends with a 69th minute penalty. He has recently missed spotkicks, but kept his composure with David de Gea going the other way.

Following the game, Tuchel was not critical over Jorginho’s blunder, but rather came in defence of the incident, citing that he was heavily disturbed by the lights.

He added to praise the courage and personality of the 29-year-old as he stepped up and converted the penalty that handed the Blues a share of the spoils.

He told Chelseafc.com: “It’s very unusual, a mistake like this and to concede a goal like this for us in general, and especially with Jorgi. I think he misjudged the situation and he was heavily disturbed from the lights so he did not see the ball in the end.”

“But it takes a lot of courage and personality to not be affected during the match, to have the courage to take the penalty for the equaliser in a crucial moment. I’m very happy that he did it.”

Prior to the game, the Blues had not beaten the Red Devils in seven league meetings. They had an excellent chance to end the streak, but failed to capitalise.

Antonio Rudiger could have won it right at the end, but hoofed his volley well over the bar. The German had space to take a touch before unleashing his shot.

It was a game of missed opportunities for the west London giants, but they continue to hold a slender one-point lead over Manchester City at the top of the table.

The Blues have now dropped points in the last two home games in the form of draws. They will be aiming to return to winning ways at Watford on Wednesday night.