Liverpool face off against arch-rivals Everton at Goodison Park in the Premier League on Wednesday night.

The Reds have been in good form coming into the Merseyside derby, winning their last three games in all competitions. The story has been completely different for the Toffees, who have not been on the winning side over the past seven matches.

Ahead of tomorrow’s derby at Goodison Park, Jurgen Klopp’s side are favourites and will be keen to avenge last season’s results. They picked up just one point in their meetings last term, but Liverpool will fancy their chances of sealing a comfortable win tomorrow.

Here is how Liverpool are expected to line up against Everton:

Goalkeeper: Alisson Becker has had another fine campaign in goal, and he is now tied with Ederson Moraes and Edouard Mendy for the Golden Glove award with seven clean sheets apiece. The Brazilian will be eyeing his third straight league shutout.

Defence: Trent Alexander-Arnold and Andrew Robertson are undisputed starters in the full-back roles for Liverpool and the same is the case for Virgil van Dijk at the heart of the defence.

Ibrahima Konate produced an excellent showing against Southampton last weekend where Liverpool ran out 4-0 winners. The £31.5m-rated star may get the nod over Joel Matip to partner Van Dijk again with Joe Gomez still on the sidelines.

Midfield: Klopp won’t have the services of Naby Keita due to a hamstring issue while Curtis Jones continues to remain sidelined with a head injury. Thiago Alcantara should be a definite starter on the back of two strong performances, capped with goals.

Fabinho is likewise assured a starting spot in the holding role for Liverpool. Alex Oxlade-Chamberlain has impressed in recent games, but Klopp may stick with the experience of captain Jordan Henderson in a three-man midfield.

Forward: There are no selection issues for Klopp to ponder over in attack. Roberto Firmino has been ruled out as he continues to work on his fitness following a hamstring injury. It should be a straightforward decision up front with Mohamed Salah and Sadio Mane playing either side of Diogo Jota, who has bagged three goals in his last two appearances. 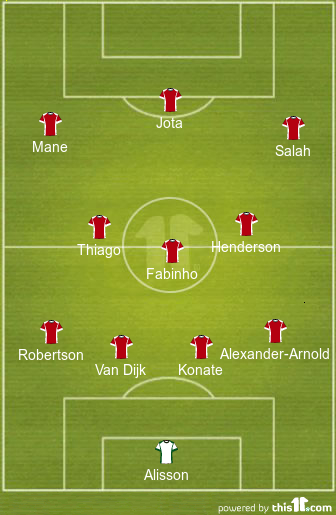