Chelsea travel to Spain for the second leg of their Champions League quarter-final against Real Madrid on Tuesday night. Here is our expected line-up

Chelsea travel to the Spanish capital for the second leg of their Champions League quarter-final against Real Madrid on Tuesday night.

The Blues suffered a disappointing 3-1 defeat in the first leg at Stamford Bridge last week. Karim Benzema was in sublime form for Madrid, bagging a hat-trick.

Chelsea face a difficult task of overcoming the deficit on the road, but will go into the second leg with optimism after the 6-0 Premier League rout of Southampton. Timo Werner was among the pick of the players with a brace, and could keep his starting spot in midweek.

Here is how Chelsea could line up against Real Madrid:

Goalkeeper: Edouard Mendy had a poor outing in the first leg with his loose pass contributing to a costly third goal. Despite this, manager Thomas Tuchel backed him to start between the sticks at Southampton. The Senegal star is expected to keep his place ahead of Kepa Arrizabalaga.

Defence: Cesar Azpilicueta has tested negative for coronavirus, but Tuchel may stick with the same central defensive trio from the Saints win. Andreas Christensen, Thiago Silva and Antonio Rudiger are most likely to start at the heart of the Chelsea backline tomorrow.

Reece James should feature at right wing-back ahead of Ruben Loftus-Cheek. The £49.5m star came off the bench at St Mary’s, having only recently returned from a knee injury. Marcos Alonso is set to continue in the left wing-back position in the extended injury absence of Ben Chilwell. The Spaniard netted the first goal in the 6-0 drubbing of the Saints.

Midfield: N’Golo Kante is regarded as an undisputed starter regardless of his recent run of form. Meanwhile, Mateo Kovacic impressed playing through the full 90 minutes against Southampton with Jorginho on the bench. The Croatian ace is likely to keep his place after a strong performance.

Attack: Mason Mount was superb at the weekend with a goal and two assists to his name. The Chelsea graduate should continue in his customary number 10 role. Tuchel may go with two up front after the wonderful showing of Timo Werner alongside Kai Havertz.

Werner has been on the fringes of the first-team this year, but showed his class on Saturday with two goals while hitting the woodwork on three occasions. The German should be backed to partner his compatriot Havertz, who recently netted his fifth goal in as many league games.

Romelu Lukaku looked promising in the second half against Madrid at home, but was unavailable for the Saints clash with a painful Achilles injury. The Belgium international has failed to recover in time, and won’t play any part against Carlo Ancelotti’s side tomorrow. 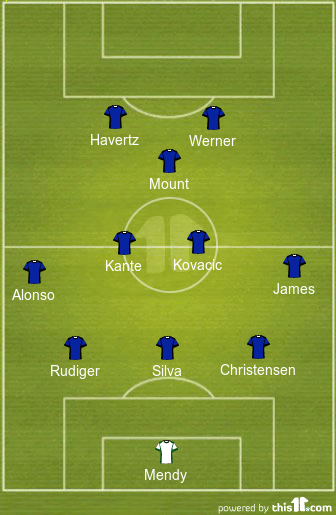