Manchester United take on Norwich City at Old Trafford on Saturday afternoon. Here is the line-up we expect Ralf Rangnick to select for the game.

Manchester United take on Norwich City at Old Trafford on Saturday afternoon. Here is the line-up we expect Ralf Rangnick to select.

Goalkeeper: David De Gea will once again start in goal for Man Utd this weekend so Dean Henderson will have to settle for a place on the bench against Norwich.

Defence: Man Utd will assess the fitness of Raphael Varane after he missed the 1-0 defeat to Everton last weekend, however, the French international is not expected to return to action on Saturday. That means Victor Lindelof should continue alongside Harry Maguire in the middle of the back four.

Alex Telles will retain his place at left-back as Luke Shaw has been ruled out for a few weeks after having bolts removed from his ankle. We could see a change at right-back with Diogo Dalot coming in for Aaron Wan-Bissaka.

Midfield: Manchester United could be without Fred after the Brazilian international picked up a hip injury at Goodison Park last time out. Scott McTominay also missed the trip to Everton with a minor foot problem but he could be back in contention this weekend.

McTominay is in-line to replace Fred while Paul Pogba is also pushing for a recall after being dropped for the Everton game. Nemanja Matic is the man set to make way for the Frenchman at Old Trafford on Saturday.

Bruno Fernandes is expected to continue in the attacking midfield position for Man Utd against Norwich. Therefore, the likes of Jesse Lingard and Juan Mata will have to settle for places on the bench once again.

Attack: United have received a huge boost with Cristiano Ronaldo able to train this week despite picking up a knock against Everton. The Portuguese superstar should lead the line up front once again on Saturday.

However, Edinson Cavani remains a major doubt due to a calf injury that he sustained during the international break late last month. The Uruguayan hitman is unlikely to be involved against Norwich.

Jadon Sancho should keep his place in the Man Utd attack but we could see Marcus Rashford dropping to the bench with Anthony Elanga given a recall. 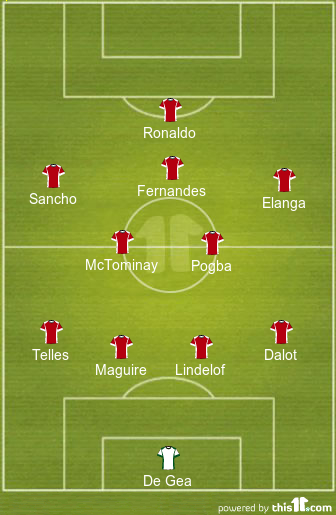