Yes, your suspicions from the headline are true – another summer, and more rumours concerning the Arsenal captains future. Will he stay, will he go? Well the answer to that is almost impossible to know, with pretty much the same rumours being thrown ab… 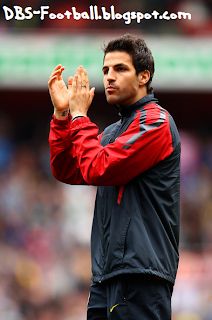 Yes, your suspicions from the headline are true – another summer, and more rumours concerning the Arsenal captains future. Will he stay, will he go? Well the answer to that is almost impossible to know, with pretty much the same rumours being thrown about – namely, the one that Barcelona will return in an attempt to persuade the Spaniard away from Arsenal.

This time, Manchester City are involved, just like they are with every other possible player they can be, with Mancini reported to be ready to offer an unbelievable £58 million, according to The People. Of course any deal would need the support of the Abu Dhabi group which owns the club, and apparently, Mancini has that backing for this particular move.

With City’s money, absolutely any player can be linked to them at any price and be a believable rumour, so this rumour – although potentially rubbish is, with City’s audacity and money is certainly believable – though I cannot see Fabregas wanting to go to City.

He wants to play football, and preferably at Barcelona. That dream of his has however been stalled for a while by Arsenal, and now Barcelona are the ones stalling, with the Barcelona director of football saying of the proposed Fabregas deal:

“Right now, everything is dead regarding a transfer.”

That certainly will please Arsenal fans, who no doubt would despise seeing their captain leave the club, especially to the side who have been a massive pain for the past few summers.

Moving on to Sergio Aguero, and only yesterday, I said on the blog that he had announced his desire to leave Athletico Madrid. The situation however was made slightly awkward when his club said today that he would be going nowhere, with Madrid ready to force the Argentinian to honour his contract:

“We are not going to change our thinking. We will not sell or trade for Aguero. If anyone wants to know something new, ask him directly.”

“There is no getting around it. El Kun has a signed contract. He has shown his desire to leave, but we say the same thing. We do not want to sell. We respect his decision, but he also has to respect ours. He has a commitment to us.”

“In his recent statements I heard him say he had no intention of leaving. I do not know how we will address this issue, but this is not the end of the world.”

And as Athletico fight to keep hold of one star, they have conceded defeat on another, David de Gea. Manchester United will apparently announce the signing of him on Monday – two days after the Champions League final.

Guillem Balague said that a deal between the clubs was struck two months ago, but now De Gea has finally agreed to a deal – initially reluctant to leave his home club.

£18.3 million has apparently sealed the deal for United, who have now replaced Edwin van der Sar, how successfully is another matter, and will be found out next season. He has though, a tough job in replacing the big Dutchman who is universally popular at Old Trafford.