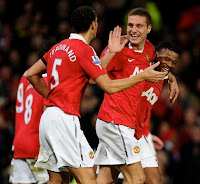 In the second installment of a four-part series, The United Religion rates how each of Manchester United defender’s contributed to the success of the club during the 2010/11 season.

When a club has a successful season like one United had, there had to be a combination of very good seasons by old figureheads and some breakout performances by younger and there quite a few of those when looking at how the defenders rated.

Wes’ season started off on the wrong foot with uncalled, foul-mouthed rant towards the manager, which saw him punished severely by being limited to just 15 total appearances. There were a couple of instances in the last half of the season, which saw him captain a team of reserves against Crawley Town – scoring the game’s only goal, and then, in his last appearance of the season, Brown was hauled off at halftime against Bolton, which some say was due to injury, but it would have had to be a serious seeing as though the Reds did not have an experienced defender on the bench. Despite his long-standing relationship with the club, it very probable that Wes will not be back at the club next season.

After bursting on the scene a couple of years ago, Evans has endured a very trying time trying to rediscover his that form. Due to the emergence of Smalling and his own poor form, Evans’ opportunities dwindled and only managed 19 appearances. Not all of those appearances were below par, because against Liverpool in the FA Cup and then against Chelsea at the end of the season, at left-back, nonetheless, Evans performed like the player that the United fans have come to know and expect.

The self-inflicted troubled time that Patrice endured during the 2010 FIFA World Cup carried over to the club season and he was far cry from his controlling displays for United last year. However, Evra was still able to feature in 47 games for the Reds in 2010/11, and he even managed to score his first goal for the club in three-and-a-half years against Wigan Athletic. Even though he was tempted with a move away from Old Trafford, Evra was awarded with a contract extension, so he will look to refocus his energy and build on his very sub par season next year.

Because of injuries and playing second fiddle at left-back to Evra, Fabio has always been seen as the other twin, but this season he made his biggest impact. In his two prior seasons, Fabio had only 13 appearances to his name, but this year he nearly doubled that by appearing 24 games – including a start in the 2011 UEFA Champions League Final. The young Brazilian full-back also scored his first two goals of his young United career – and the one he tallied to inspire the Reds to an FA Cup romp over Arsenal will live long in the Old Trafford faithful’s memory.

Started the season off on the treatment table, but his first game back from injury, Ferdinand turned in a Man of the Match performance against Valencia CF, which shows just how good and influential he is. Another prime example of how invaluable Rio was his dominance against Chelsea in the last three games that they played against each other this season. In all, Rio made 27 appearances, which was down to the fact of him missing two months during the middle of the season and there was no questioning to why the club stumbled during that time.

One of the most unheralded players to ever play for the club, O’Shea again turned in a very assured season – making 32 appearances this season. Leading United out in the UEFA Champions League Semifinal against Schalke 04 as captain, O’Shea is still a valued member of this squad by Sir Alex Ferguson.

Started the season out like a blaze of fire and locked down the right-back position, which saw him make 28 appearances, which equaled his best total for the club. The energy and enthusiasm of the young right-back is infectious and Rafael has grown in stature. His unfortunate sending off against Bayern Munich last season, which would have crippled a lesser player’s confidence, but, instead, Rafael has not changed his approach, which will benefit him and the club long-term.

Still only 21 years young, Chris has already made the leap from rags to riches and offers Manchester United a very distinguished central defender for the future. After only making 19 appearances in two years for Fulham, Smalling made 33 appearances in his first season at Old Trafford. One of the biggest surprises of the season, the tall center-back filled in admirably well for Ferdinand and he also showed his versatility by being able to slot in at right-back, if it was necessary, too. Like his mentor, Smalling has uncanny ability to remain composed on the ball and does not get rattled in the biggest of games.

After some rumors swirled about him leaving Old Trafford for Spain, Vidic signed a new contract and was given the honor to be United’s captain’s armband. Once he donned that piece of cloth, Vida became even more of leader of example and was seen many times sacrificing his body to make sure the ball did not get passed him. Nemanja made 47 appearances for the Reds this season, but he also contributed at the other end scoring five goals, which tied him for sixth for the club.

Over the last couple of years, Sir Alex Ferguson has placed a special emphasis on focusing on team defending, and even though they conceded the most goals, 37, they have since the 2001/02 season, these group of players played their part in Manchester United’s Barclays Premier League triumph.