Chelsea get back to Champions League action tonight when they take on Benfica in Portugal. Here’s team news, likely line-up and predicted score for the game.

Torres or Drogba - Who will start tonight?

Chelsea get back to Champions League action tonight as they take on Benfica in the first leg of their quarter-final clash at the Estadio da Luz.

Roberto Di Matteo guided the Blues to the quarter finals after a stunning comeback against Italian side Napoli. Trailing 3-1 after the first leg, Chelsea ran out 5-4 aggregate winners after a thrilling night at the Bridge which ended with defender Branislav Ivanovic hitting an extra time winner.

Benfica have an impressive home record in Europe and are unbeaten in their last 10 games at the Estadio da Luz. Chelsea go into the game looking to improve upon their disappointing away record in Europe this season, after failing to secure a win in four away games so far.

Branislav Ivanovic is likely to be recalled after missing the Spurs game. Ivanovic came through a training session yesterday so should replace Bosingwa at right back.

The big decision for Di Matteo will be who to select up front. Didier Drogba started at the weekend but Fernando Torres is pushing for a recall. 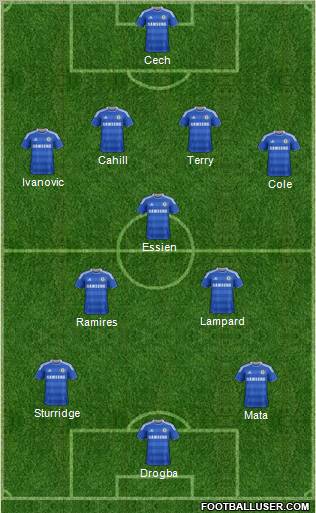 Make no mistake, this is going to be an extremely tough game for Chelsea. Benfica came through a group that included Manchester United and held the Premier League champions on both occasions they played them. Roberto Di Matteo would no doubt take a score draw before the game, and i can see the Blues getting exactly that. Benfica 1-1 Chelsea.