Chelsea welcome Benfica to Stamford Bridge for the second leg of their Champions League quarter final tonight with the Blues in the driving seat after a vital 1-0 away win in Portugal.

The victors will book a semi-final date with Barcelona after the defending champions beat AC Milan 3-1 on Tuesday night.

Chelsea have David Luiz, Ashley Cole and Raul Meireles all one yellow card away from missing the first leg of the semi final, so they will be mindful not to pick up any un-neccassary bookings tonight.

Roberto Di Matteo could have Didier Drogba, David Luiz and Raul Meireles available after all three trained ahead of the game. The trio were injury doubts after Drogba and Meireles missed Saturdays win over Aston Villa, while Luiz picked up an ankle injury at Villa Park.

Drogba may miss out anyway with the rejuvenated Fernando Torres likely to lead the line up front. Meireles will also face a fight to secure a starting place with Frank Lampard, Michael Essien and Ramires likely to be the first choice midfield three.

Di Matteo must decide whether to play Saloman Kalou or Daniel Sturridge on the right. Juan Mata is certain to start on the left.

Benfica travel to London without several first team regulars. Defenders Jardel, Miguel Vitor and Ezequil Garay all miss the game through injury, and captain Luisao is also a major doubt, meaning defensive midfielder Javi Garcia may have to drop back to play at centre half. 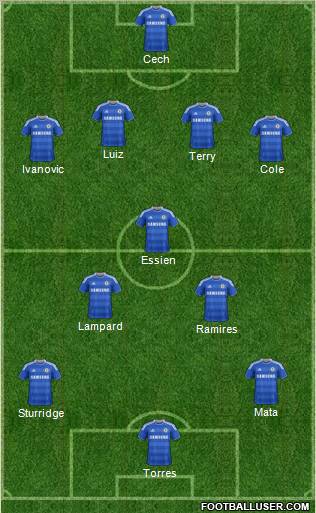 Benfica will pose a real threat going forward but with their defensive injury problems, Chelsea will also have plenty of opportunities at the other end. The Blues have been formidable at the Bridge in Europe this season, winning all their games at home so far. I can see this trend continuing. Chelsea 2-1 Benfica (3-1 agg).