Arsenal take on Bradford tonight in the quarter finals of the Capital One Cup. Here’s a preview with team news, likely line-up and predicted score for the game

Arsenal take on Bradford tonight in the quarter finals of the Capital One Cup – a competition that provides a real chance of a trophy this season.

The League Cup has been blown wide open after the exits of Man City, Liverpool, Tottenham and Man Utd in previous rounds. While we shouldn’t take any opposition lightly, the fact Chelsea are the only team left in the competition who’re above us in the table shows this is a real chance to break our trophy duck.

The Blues have to go to Elland Road to face Leeds United off the back of their trip to Japan, so their progression to the Semi Final’s is by no means secured either. Basically, lets not mess this up Arsenal. Put in a professional display tonight, book our spot in the Semi’s and lets really try and win this Cup. It’s there for the taking this season.

Bradford boss Phil Parkinson is expected to name an unchanged side for the game, but it’s highly unlikely Arsene Wenger will do the same.

The boss has claimed he’ll play a strong side but that could easily mean he fields a team similar to the one that faced Olympiakos in the Champions League – which was without several first-team names.

I’d expect the likes of Aaron Ramsey, Andrey Arshavin, Carl Jenkinson, Francis Coquelin and maybe even Marouane Chamakh to feature tonight. Youngster Jernade Meade could also start at left back while Thomas Eisfeld may also get a run-out.

Olivier Giroud is out with a back injury picked up during Saturdays win over West Brom. It will be interesting to see who Arsene starts up top in his absence. I have a feeling it will be Chamakh but I’d like to see either Podolski or Gervinho given a go through the middle instead.

Theo Walcott remains out with a calf problem and is joins Laurent Koscielny, Andre Santos and Abou Diaby on the sidelines. 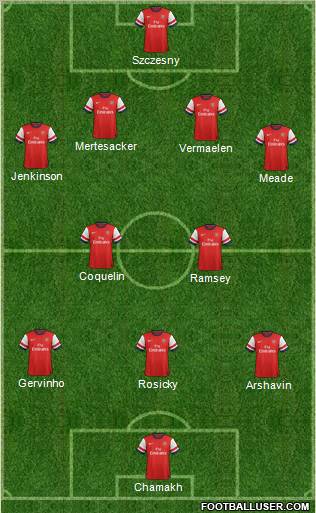 As I’ve already said, the Capital One Cup is an excellent opportunity for us to win a trophy this season so despite playing a League 2 side we shouldn’t take them lightly. They will be bang up for this game. It’s their cup final, so whatever team Wenger puts out they better be ready for it. But we should have too much quality for them and so I’m going for an away win. Bradford 1-3 Arsenal. COYG!

What team would you put out and what’s your score prediction? Get involved in the comments section.