Chelsea vs Tottenham Hotspur – A Big London Derby – Its not an understatement when I say that this could well be the BIGGEST game of the season so far for Chelsea. The repercussions or the advantages of a win here are huge. Both teams need a victory to boost their chances of playing in the next season’s UEFA Champions League. A game that will define the future of each club in terms of a top four finish and the coveted Champions League spot.

In Arsenal we have the third team fighting along with Chelsea and Spurs to secure the third and fourth position in the  Premier League table. As it stands, Chelsea are currently in third place with 68 points having played 35 games. Spurs have played the same number of games and are fifth in the table with 65 points. Having played a game extra as compared to Chelsea and Tottenham, Arsenal stand fourth in the table with 67 points.

If Chelsea win then we will almost certainly qualify for 2013-14 UEFA Champions League due to our superior goal difference over Tottenham. As for Spurs a loss will most probably end their dream of Champions League football next season. A draw wont harm Chelsea either but a win is something that will get rid of the nervousness and anxiety that Chelsea fans have been feeling for the last month or so. It all had began when Benitez arrived at Chelsea and it seemed like we might slip-up in the race for top four given the fact that we were involved in so many competitions, not to forget the fixture pile-up we had at the start of the April month. But come mid-May and we find ourselves in a better position then what we were before. Yes we went out of FA Cup at hands of the Manchester City but we have put on a good show with some good wins and a place in the finals of the Europa League.

Rafa Benitez has done a good job during this recent period and it was reflected when he received the ‘Barclay’s Manager of the Month’ award for April. And personally speaking its time everyone accepts and appreciates the fact that he has done a good job, but its a job half-done. Securing top four finish is the utmost criteria for Chelsea Football Club and a Europa League Cup would be the icing on the cake (something which Benitez has stressed upon quite a few times in this last few weeks).

This game marks the return of Andre Villas Boas, who as a Spur’s manager has had a good season so far. AVB never looked settled at Chelsea but the same cannot be said in his case as a Spur’s manager. The return of AVB to Chelsea would hardly be the talking point come Wednesday as he never had the liking of the Chelsea fans but for AVB it could be a point-to-prove scenario, a jilted love-affair of sorts.

Chelsea come into this game with one of the best victories of this season, a 1-0 win over Manchester United at Old Trafford. Few thought Chelsea could pull-off a win against the red-half of Manchester but Juan Mata proved them wrong. Mata scored a late winner for Chelsea which strengthened our grip on third position in the table.

Meanwhile, at White Hart Lane it was another left-footer from the PFA player of the year award winner, Gareth Bale, who scored a dramatic late winner against his old club Southampton that ensured they are still alive in the fight for top four.

Spurs have never won at Stamford Bridge in the Premier League, while Chelsea on the other hand would be looking to do a double over Spurs. A thrilling 4-2 win earlier in October saw Chelsea secure all three points at White Hart Lane. Chelsea’s record at Stamford Bridge against Spurs gives a good reading, with 16 wins and 9 draws of the 25 games played. But this could be the biggest of all London derby’s and with such high stakes on the line we can definitely expect some fireworks on Wednesday night.

Chelsea will have Eden Hazard available for this game after missing the game against Manchester United due to calf injury. Both John Obi Mikel (hip) and Ryan Bertrand (knee) are out of this one due to injuries but Oriol Romeu is in contention following a long-term knee problem and could find himself on the bench.

Tottenham will asses the fitness of Aaron Lennon after he was forced off due a tight hamstring he picked up in the game against Southampton. Dembele, who was also substituted for that game due to muscle problem, should be available. Midfielder Sandro (knee), Younes Kaboul (thigh) and William Gallas (calf) are unavailable. 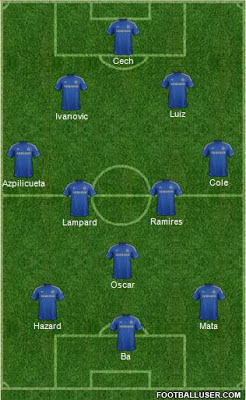 This surely promises to be a cracker of a game. Stakes are high!! Records on the line!! Manager and player comebacks!! Both teams have had some high scoring games against each other so far. And with such attacking line-ups you could expect the same again. But this time around I will go for a comfortable victory for Chelsea.