Chelsea are in Romania to face Steaua Bucharest looking to get their Champions League campaign up and running. Here’s a preview with team news for the game.

Chelsea are in Romania to face Steaua Bucharest looking to get their Champions League campaign up and running.

The Blues suffered a shock 2-1 defeat to FC Basel in their opening fixture in Group E two weeks ago and defeat again tonight will leave the west Londoners with it all to do to qualify for the knockout stages.

Chelsea became the first defending champions to be knocked out at the group stages last season and a repeat would be seen as a disaster considering how straightforward the group was expected to be.

Jose Mourinho’s men warmed up for the game with a 1-1 draw against Tottenham at White Hart Lane on Saturday, with Juan Mata coming off the bench to set up John Terry for the equaliser early in the second half.

Steaua on the other hand have enjoyed an unbeaten start to their domestic season but lost 3-0 to German side Schalke in their opening European game so will be desperate to get some points on the board tonight.

Chelsea manager Jose Mourinho has confirmed that Juan Mata will start the game after his impressive recent display’s against Swindon and Spurs.

The Spaniard will replace Eden Hazard after he was ruled out of the clash with an ankle injury picked up on Saturday, although he 22-year-old is receiving treatment and is hoping to be fit to face Norwich on Sunday.

Winger Kevin De Bruyne has been left back in London after Mourinho was left unimpressed by his recent performances, while Michael Essien was also left out as he continues to fight for full fitness.

Fernando Torres is likely to lead the line once again after an impressive showing at White Hart Lane, although it was marred by a controversial late sending off.

Steaua Bucharest manager Laurentiu Reghecampf is sweating on the fitness of midfielder Mihail Pintili and Cristian Tanase, although the duo are expected to feature at some point in the game. 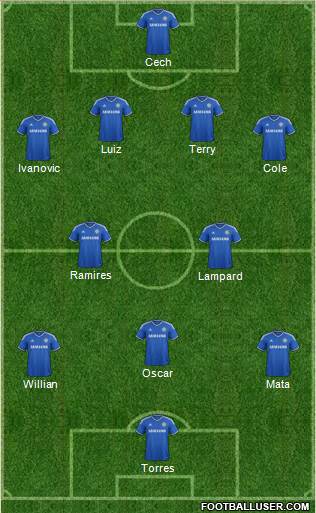 Juan Mata: The little playmaker has been out-of-favour in recent weeks but he’s back tonight and this is his big chance to stake a claim for a regular starting spot. Hopefully he can show Mourinho what he can do as Mata is far too gifted a player to be sitting on the bench.

Steaua 1-2 Chelseai: It’s going to be a difficult night for Chelsea as Steaua have an excellent home record against English sides, losing just once (to Arsenal) in their previous eight games at the Arena Nationala. However, I’m backing the Blues to edge this one and get their campaign back on track.