Chelsea take on Norwich City at Carrow Road on Sunday afternoon looking to keep in touch at the top of the Premier League table. Here is a predicted line-up.

Chelsea take on Norwich City at Carrow Road on Sunday afternoon looking to keep in touch at the top of the Premier League table.

The Blues drew 1-1 with Tottenham at White Hart Lane last weekend to leave them sitting fifth in the table heading into this weekends action. Juan Mata came off the bench in that game to set up John Terry for the equaliser and is expected to retain his place on Sunday.

Jose Mourinho’s men cruised to a 4-0 win over Steaua Bucharest in the Champions League on Tuesday but the win came at a cost as striker Fernando Torres picked up a knee injury and has been ruled out for up to four weeks. Samuel Eto’o is now likely to be recalled to replace the Spaniard up front.

Eden Hazard is also expected to miss the trip to East Anglia with an ankle knock so Andre Schurrle should once again start after putting in an impressive shift in midweek.

David Luiz and John Terry have formed something of a solid partnership in recent games so it’s likely the pair will continue together at the back. Here is the starting eleven we think will play: 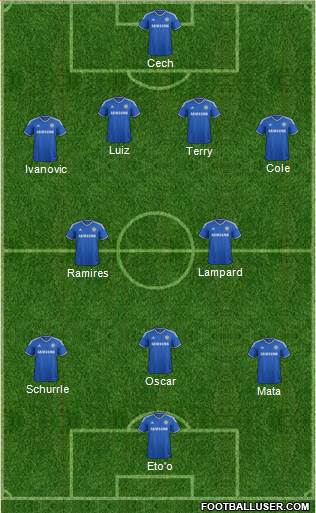