Chelsea entertain Cardiff City at Stamford Bridge on Saturday afternoon hoping to end the weekend top of the Premier League table. Here is a predicted team.

The Blues head into the weekend action sitting third – two points behind Arsenal and Liverpool – so Jose Mourinho’s men can climb to the summit if other results go their way.

The west Londoners don’t appear to have picked up any injury problems following the international break, so Mourinho should have almost a full-strength squad to choose from.

Eden Hazard may find himself on the bench as he will be lacking in match practice having missed the last four weeks through injury. The Belgian international may have found it difficult to force his way back into the starting eleven even if fully fit, such is the form of Andre Schurrle and Juan Mata.

Schurrle scored a stunning hat-trick for Germany on Tuesday night while Mata also got himself on the score-sheet for Spain, so the pair are expected to retain their places in attack.

With Fernando Torres injured, Samuel Eto’o could once again spearhead the front line with Oscar playing just behind. Frank Lampard was a late substitute for England on Tuesday and is likely to start this weekend alongside Ramires in midfield.

Here is the team we think will take to the field at the Bridge: 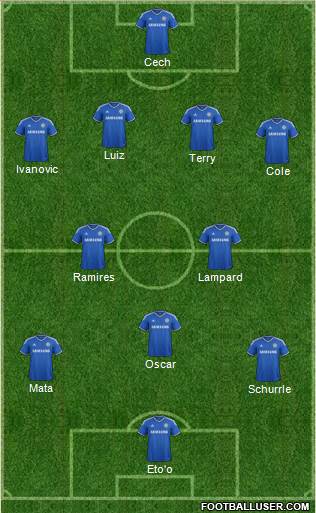