Manchester United travel south to take on Fulham at Craven Cottage on Saturday looking to close the gap on the top four. Here’s the team Moyes could go with:

Manchester United travel south to take on Fulham at Craven Cottage on Saturday afternoon looking to close the gap on the top four.

Boss David Moyes made wholesale changes to his starting eleven for the 4-0 win over Norwich in the Capital One Cup on Tuesday night so we should expected a number of first team regulars to return this weekend.

David De Gea, Jonny Evans and Patrice Evra could all be recalled into the back five with Nemanja Vidic potentially keeping his place following a positive return to action in midweek.

Marouane Fellaini may also come back in alongside Michael Carrick having been ineligible to play in the Cup while Antonio Valencia, Wayne Rooney and Robin van Persie should all return in attack.

Youngster Adnan Januzaj impressed against the Canaries and could keep his place, although Shinji Kagawa and Nani are among those who’re pushing for recalls. 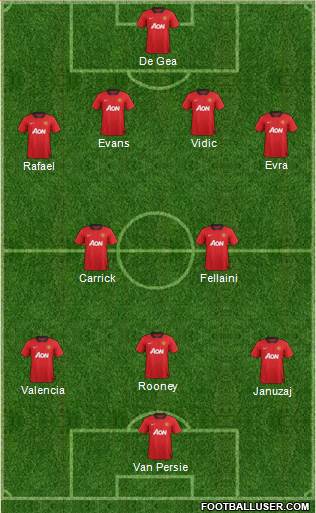